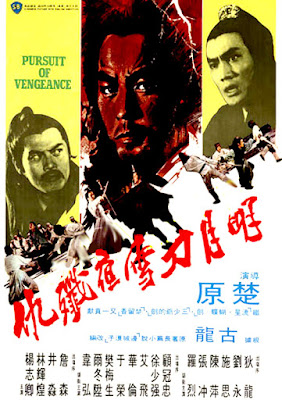 IT’S A TRAP!: PURSUIT OF VENGEANCE AND THE POWER OF THREE

The Magic Blade is a Shaw Brothers film that has accrued quite the devoted audience for its somewhat eclectic and energetic nature as a film. Deservedly so for the sure entertainment of its absurdity. In fact, there’s an entire article dedicated to why The Magic Blade works in its insanity on this site.  However, it’s not necessarily a well-known fact that the film had a sequel. This film is Pursuit of Vengeance and once again it sees Ti Lung’s unshaven, poncho-wearin’ wandering badass Fu Hong-Xue become involved in a complex conspiracy of the martial arts world where loyalties are thin and the body count is high. For a film meant to follow up The Magic Blade, I’m not sure I would expect anything more than wuxia insanity from this film.

Like its predecessor, Pursuit of Vengeance is something of a wild wuxia ride for its audience, throwing them back and forth into various problematic circumstances for our hero as he has to navigate numerous traps and try and uncover a mysterious lone swordsman that numerous villains believe him to be. In many ways, this sequel takes the basic foundations of its previous entry and then manipulates them in ways to make it different enough so that it can stand on its own. Some of this is smart and some of it can be challenging. As mentioned, the plotting is layered and often eye-rolling in its outlandishness. Immediately, Fu Hong-Xue and a handful of other heroes are introduced by being invited to a gathering where a clan leader is intent on revealing that one of them is the son of a slain hero meant to fill a prophetic return and kill his father’s murderers. Of course, like most moments in Pursuit of Vengeance, it’s probably a trap and Fu Hong-Xue must make some loose allies with other fighters to uncover the truth behind this prophecy.

Pursuit of Vengeance does not hold back when it comes to twists and spins in its narrative. There are enough unmasking moments that the entire Mission: Impossible franchise is jealous and that’s just the start. The film loves to keep its audience balanced precariously on the edge of their seat, whether the switches of alliances or reveals of plotting make sense or not, and in that regard it’s a huge success. At no point is it easy to see where Pursuit of Vengeance is actually going and that makes its mystery very fun to endure even when its completely off track. Compared to its predecessor, it does not quite have the sheer hilarity of insane characters or the manic pacing of its narrative to keep its sheer sprinting momentum at top pace, but on the other hand it’s a film that on the surface is slightly easier to consume and features a lot more likable characters that the audience gets to know.

And here is where the true key to what makes Pursuit of Vengeance such a blast to watch and that’s the onscreen chemistry of its characters. Ti Lung’s Fu Hong-Xue is understandably the main protagonist that drives the action, even if he represents a hero thrust into a situation out of his control initially, but the film works by developing a three pronged hero effect. Like The Magic Blade, which featured two more companions for Fu Hong-Xue to share the screen with on and off again, Pursuit of Vengeance builds a trifecta of charismatic swordsmen to play off of one another. However, unlike its previous entry, this one takes it to entirely new and highly entertaining levels. Along with Fu Hong-Xue, there is Lau Wing’s ultra-arrogant and smarmy Ye Kai and the rather inept assassin Lu Xiao Jia played with screen devouring comedic effect by Lo Lieh. Each one has an intently defined character and share remarkable screen stealing ability so that when they are on screen together it just sparkles. When all three share the screen, complete with off handed bickering, slapstick humor jokes (Lo Lieh gets naked TWICE), and intense, crisp choreography, it’s wuxia magic. Any one of them could sell this film, but with the power of three here it’s damn near jaw dropping in its entertainment value.

Of course, the rest of the film plays out like the standard Chor Yuen wuxia with gimmicks galore, beautiful use of visuals and sets, and high flying wuxia swordplay that fans will instantly enjoy. Although I will mention I’m not sure if I was relieved that Fu Hong-Xue’s spinning blade rarely made its grinding noise or if it was disappointing, but that’s ultimately a small thing and one that others will probably not even care about. Still, Pursuit of Vengeance remains one of those massively entertaining martial arts gems in the Shaw Brothers catalog that deserves a lot more attention. It’s a sword slashing romp of a good time and it’s power-of-three hero charisma more than makes it instantly memorable.