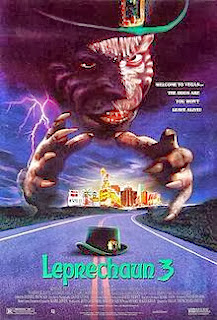 While "Leprechaun" might have earned its franchise by being a film that was a ton of fun and slightly scary at the same time, the formula was already running thin by the time that "Leprechaun 2" came out. That being said, this is a long living franchise and I wasn't looking forward to spending a whole lot of time with the films. Yet here I am writing my review for the third film whose sole foundation is that we get to see our titular villain stalking around Vegas and killing folks in even more ridiculous ways. Take it for what it is, but "Leprechaun 3" is still a terrible, terrible film.

"Leprechaun 3" tries to hold onto the formula by having our monstrous and greedy leprechaun wind up in Vegas as the statue he was left as in the end of of the first sequel. Once again we are treated to him losing a piece of his gold from his stash as he's unleashed by an inept pawn shop owner to kill his way through a low end casino called "The Lucky Shamrock." Ironically, "Leprechaun 3" makes the second look like it tried with its relatively new spin on him finding a bride. This one goes back to the basics with him sniffing out his missing shilling (yes, he actually can smell it and yes, he does rhyme shilling with killing about a dozen times) and killing anyone that gets in his way.

There is, however, one trick to "Leprechaun 3" that arises in the latter half of the film that makes it somewhat worth the viewing. We find out, in addition to the incohesive lore that drags these films down, that his shilling an give its owner one wish and that if you are bitten by a leprechaun (or have his blood fall into your wound...they are a little shady on the details here) that you also become a leprechaun. While this idea might seem intriguing, "Leprechaun 3" tends to falter on its promises due to a significantly lacking budget and a significantly lacking script. Half the time I was trying to figure out just what powers leprechauns had, as they certainly seem limitless until the script calls for it, and the other half I was laughing at the ridiculousness of the film.

That being said, director Brian Trenchard-Smith seems intent on pushing the humor even further here by embracing the camp and running with it. While the film is easily the worst of the franchise thus far, I have to admit that I was far more entertained with it then I was "Leprechaun 2." Warwick Davis continues to thrive in his rhyming sinister way as the evil leprechaun and he does get quite a few terrible one liners for laughs. Most of them are at the expense of over the top deaths based on the 'be careful what you wish for' mantra, including one where a woman explodes from her boobs being too big, a man is electrocuted to death by his "living TV program," and a magician gets a final 'cut.' The special effects are hit or miss overall, but with the budget and limited talent on screen you can't fault it too much.

While "Leprechaun 3" might be a terrible film overall, it has it's charms in that 'being so bad, it's good' way. The series at this point has gone the way of the "Nightmare On Elm Street" sequels by focusing on the cartoonish humor and sex jokes and it loses a lot of credibility as a horror film there. Just know that if you want to continue with this series, buckle down for the decreasing budgets and quality.