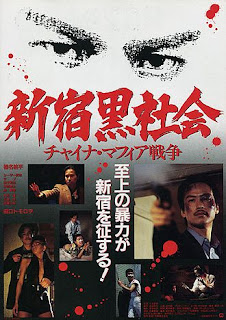 While it’s not expressly said here on the site, Takashi Miike is easily one of the favorite directors by the writing staff here. For me, he’s one of my top five favorites and it was always unfortunate that a lot of his stuff has recently gone out of print or never actually makes it over to the US for a release at all (in reference to his entire robust career). Fortunately, Arrow Video must have seen this void recently as they announced a slew of Miike films will be getting the Blu Ray treatment. First up this year is the Black Society Trilogy. It’s a thematically connected set of films about crime that kicked off Miike’s career as film maker rising from the bowels of V-cinema. First up in this set (and the focus for this review) is Shinjuku Triad Society that sets the stage for the themes and style of the next two films – and perhaps lays a lot of ground work for the rest of Miike’s continuing career. It’s a film that’s gritty, often abrasive in moments of oddity, and completely effective at telling its story. It’s not perfect, occasionally showing its rough roots in smaller things like editing, but it’s still a fantastic modern spin on the yakuza films from decades prior in Japan.

Kiriya (Kippei Shiina) has already had a very tough life and his latest case as a police officer might be one of his most dangerous yet. Tension has been mounting between a yakuza clan and invasion Chinese triad group and when Kiriya finds out his brother has become the lawyer for the latter, things start to become personal. As he digs into the dirty rivalry of Shinjuku though, he finds that the thread he is pulling is much deeper than initially thought and it could leave him and his family dead.

As an early Miike film, Shinjuku Triad Society is a fascinating blend of the old and new of Japanese cinema. In a way, it’s Miike’s signature extremism and off center use of characterization that drags the yakuza film kicking and screaming into a modern age in this first entry of the Black Society Trilogy. There is a significant influence of style from Kinji Fukasaku and his films like Battles Without Honor and Humanity and Graveyard of Honor on display here, particularly in the gritty, kinetic energy that pops up in some of the action sequences in the opening and ending or in the more complex series of character interactions, and from there the film builds on that to deliver an intense spin on those foundations. Instead of just rehashing the already worn, but still solid yakuza tropes of that era, Shinjuku Triad Society adds in a lot of unique layering that works and this is where the film shines. It’s a film that tells its story in slices of smaller and often abrasive moments, where characters explore their position in the shifting underground world of Shinjuku. The constant tension between various groups and the complex character connections is what really brings back the tone of 70s yakuza films here and it lays that core system that doesn’t quite push the audience too far off – if you’re familiar with the style it comes off as comfortable even – and it allows Miike to add his style on top of it.

For those who are familiar with later Miike films, you will recognize his traits that start boiling to the surface here. The flawed characters, often defined by their outsider status or unusual traits, litter the landscape of this dirty and violent world. The tension that mounts between them from their alliances to lovers, clans, or family occasionally bursts into streams of intense violence, a strategy that Miike would use in many films in his career. Shinjuku Triad Society is not necessarily a film that is easy to consume for the average cinema fan, sequences of intense violence, sexual assault (which at one point is used as a means of police interrogation), and characters that are never as clean as they might seem, all make it a film that pushes boundaries when it can. There are some characters that are completely defined by their quirks, including a prostitute who’s allegiance seems to be only to those who please her more than anything else, but Miike paints them in such a way that it’s not nearly the detriment that it might have been considering. At times it makes them cartoonish, but there is this focus that the world of our main protagonist, an outsider himself of mixed Chinese and Japanese heritage, is slipping further into a realm that increasingly gets more violent, darker, and obscene as he goes. He’s certainly not portrayed as a goody two-shoes by any means, but Miike’s style makes him seem humane in a world that loses its humanity in odd ways. It’s a blend of modern exploitative elements into the usual yakuza film mold that works on many levels.

The restoration of the film is impressive too considering some of the very fuzzy and gritty images and clips I’ve seen of previous releases. However, the best part of this Arrow version of Shinjuku Triad Society is that they understood how important the meaning and use of different Asian languages and dialects were to the film. They are indicated in the subtitles using various brackets so that US or UK watchers can quickly discern some of the dialogue and character interactions that are reliant on the language being spoken. It’s this kind of detailing for the release that makes this Arrow version the definitive one to own for fans. Not to mention, it has a commentary with Tom Mes which is always a bonus in my book.

As mentioned, the film is a bit rough around the edges. The editing at times can be a bit choppy and the second act drags on a bit too long as it adds in more and more characters that may seem important, but end up being pegs on the main character’s journey. However, Shinjuku Triad Society earns a massive recommendation as a film that truly takes the classic yakuza structure and narrative, but gives it that distinctive Miike spin of outrageous (and yet shockingly deep) style. It’s a film worthy of watching a few times to dig into its themes of family, tension, and placement in life all while being delightfully abrasive in how it approaches them. Shinjuku Triad Society comes with a strong recommendation and it’s a great way to start digging into Miike’s filmography.