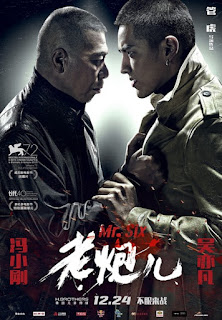 I typically don't go into a film expecting anything, but when a film is advertised heavily as an action / gangster film, I sort of believe I know what I am at least sitting down to watch and getting myself into. No. Not her... not with Mr. Six. Instead of a gangster flick or even action, what we get is the build up to said type of genre and then it is pulled from us to reveal a melodrama, and a pretty solid one at that.

Without going into the plot of Mr. Six too much, just know that you will not even remotely get what you are thinking and perhaps even hoping for, in my case. That being said, the film is solid. It's nothing phenomenal, but good nonetheless. We essentially get a character study on an old man whose rough past keeps catching back up to him and affecting those around him, but more importantly affecting him, all the way to his core. That man, Mr. Six, played wonderfully by renowned director Feng Xiaogang, is a once badass man, who has recently started to discover his soft side and the many emotions one goes through that he had blocked out most of his life.

The bond he lacks with his son makes up for most of the arc in the entirety of this film. It is well done, but drags on a bit a over 2 hours and admittedly becomes a little to preachy for its own good. The film, still, has its own moments that more than make up for some of the tedious repetition of the moral of the story. By the end, it has become tiresome, much like Mr. Six, and you are ready for it to be over. It is very mature in its decision during the finale, but nothing ever quite feels paid off and perhaps that is intentional.

All in all, Mr. Six is a nice melodrama with a certain edge that you won't find in many Chinese movies. It takes some risk and some of those pay off. Once again, it was wonderful seeing Director Feng in front of the camera, and he turns in a truly wonderful performance and really carries the entire weight of the film. You get really invested in him as a person.

I will say, as others have, do NOT go in expecting certain things, and you may be pleasantly surprised. Mr. Six is a mixed bag, but some things in said bag, are absolutely worth it!