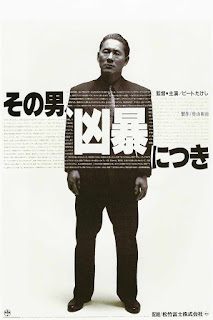 Kitano's debut comes out of the gate swinging with this fast-paced bloodbath of a gangster film. It doesn't really focus on the aspect of gang members, like his latter works, but he (Kitano) as the cop, is just as, if not more crazy than any gangster in the entire story. Mixing this violence with Kitano's trademark dark humor, you easily get one of Kitano's very best works to date.

Initially I thought the film was sort of lacking, despite the strong opening, as the scenes that unfold are pretty mundane and repetitive, but quickly realized we were just on the beat with Kitano's character, no pun intended. It's designed to show that even in the most simple situations, his handling of crime doers is far above and beyond the law, making his extremes later on very believable. How he hadn't been fired before is beyond me, but I just went with it.

The story is fairly simple, unfolding from the training of a new partner, to an investigation / revenge tale. It is very easy to follow and never becomes muddled, despite there being quite a large amount of characters. It's a cold world he builds inhabited with very questionable human beings. Not that he is really one to route for, you do find yourself wanting Kitano to get the bad guy, even though he is just as foul a creature himself.

I don't really want to spoil anything, but the film really works well as both a popcorn flick and an arthouse piece, though it leans far more on the entertainment side this time around. If you are looking for a hard-boiled crime flick, this is one to go with. It never lets up and constantly keeps you engaged from beginning to end.


I can't praise Violent Cop enough, and admittedly I went in with tampered expectations, with it being his debut and all. I may sound like a broken record at this point, but if you are a Kitano fan, or crime fan at all, seek this out, now. It's damn near flawless!