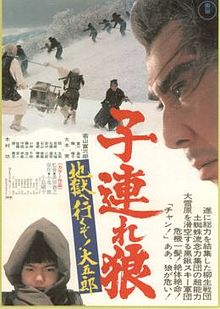 While the fifth entry marked the return of Kenji Misumi and an artistic quality to the Lone Wolf and Cub franchise, the sixth and final entry will see it hit the lowest point. Lone Wolf and Cub: White Heaven in Hell might be one of the most memorable films of the series particularly with its epic, snowy battle in the final act, but it’s also the one with the least amount of resonating effect after the film finishes. This is for a variety of reasons, including a new director in the fold and its writing, but in the end it’s a film that tries to survive purely on visuals and lacks any kind of emotional or artistic heartbeat underneath. It’s a fun movie and the visuals are strong. Yet, it just doesn’t have that knack for giving any of it depth beyond the basics leaving the final entry one that never wraps things up and never feels whole in itself.

The stage is set, the one eyed, white haired leader (Minoru Ohki) of the Yagyu Clan is tasked with killing Itto (Tomisaburo Wakayama) and his son (Akihiro Tomikawa) or lose face and the spot as executioner for the Shogun. His daughter is going to head up the first charge against Itto and if that fails than he will look to his illegitimate son and daughter and their mystical trickery to get the job done. Itto, however, is not one to easily be fooled by gimmicks and must figure out a way to defeat his mortal enemy’s offspring.

White Heaven in Hell is plagued by its episodic feeling. Not just the feeling that it’s one more assassination attempt on his life like the series already uses, but it feels almost like an anthology film of three smaller plots of three different attempts on his life. It’s not cohesive and it feels scattered. Each “segment” of the film has a separate villain and the flow between them is rocky at best as it jumps from gimmick and setting to gimmick and setting. For those fans who enjoy silly villains and random, vague gimmicks that they use, this film might be way more entertaining and fun than some of the other entries. Considering the combination of exploitative elements, character work, and emotional resonance that earlier entries use so well, it simply feels like this is B-level material and the scattered plotting does the film no favors in building any of its characters or pushing the franchise forward. It just exists.

Each story, however, has its perks and if the movie had focused on any one of them as a sole story for the entirety of the film it might have worked. As is, each one feels a bit rushed and unfulfilling. The first part focuses on the daughter of our evil villain and her juggling blades. Like many of the previous films, the use of a female antagonist is intriguing and director Kuroda uses her juggling blades to some fun visual effect, but she’s a poorly built villain and one that doesn’t have nearly enough build for her duel with Itto to work. Even the duel itself is something of a rehash of a previous one and it kicks the film off to a rough start.

This, of course, loosely leads into the second portion where our white haired evil villain goes to the mountains to find his two illegitimate kids (how many fuckin’ kids does this guy have?) who are…kind of…practitioners of black magic and resurrect three…kind of…zombie assassins from dirt crates. As you can tell from my ‘kind of’ additions to the previous sentence, this portion of the film is way too vague for its own good, adding in a supernatural element that doesn’t quite work for the series, and once again must zip through the characters to get to the cool visuals and the duel between Itto and his would-be assassins. While the first part kind of pitters out, this one ends on a very strange and exploitative moment that only adds to the weirdness of the rest…and yet, despite some strong visuals once again, has no resonating factor outside of some head scratching and single eyebrow raising. This segment probably has the most potential, but seemingly panders it off to just being weird instead of developing anything.

Of course, it’s the third act that everyone seems to remember the most and yet, it’s just as cold and lifeless as the snow it’s set on. While the use of a baby cart on tracks, skies, and Itto looking horrifically cold the entire time might appeal to the action fanatic in me, it kind of just uses its big budget look and unique snowy landscape to deliver a massive body count and a lot of fun blood in the snow shots. Because the first two parts had no lasting factor on the audience, this massive action sequence rings hollow in the end and the characters that last through seem no different or moved by the various events that just transpired. Visually, once again, it’s slick and snazzy, but style only goes so far with no substance underneath it. The snow sure is cool though.

The term ‘style over substance’ might be cliché at this point in film reviews, but it’s one that kept popping up as I watched this sixth and final entry. There is plenty of entertainment to be found and director Kuroda slathers on a lot of fun visuals to go with it, but ultimately this remains the worst film of the franchise and one that has no lasting effect outside of those visuals. Lone Wolf and Cub: White Heaven in Hell might be a strange and misaligned way to end such a strong franchise, but truthfully it never really ends it and that might be a blessing. It’s nice to think that Itto and Diagoro would go on to slice n’ dice their way through plenty of better adventures than this one.