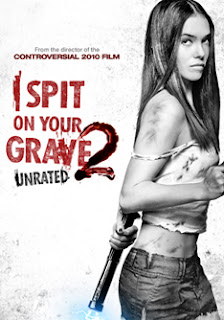 There is a lot of love for the original I Spit on Your Grave (aka Day of the Woman) within the realms of cult cinema and it deserves a lot of respect. However, the film is flawed. As of the writing of this little review, I have taken a lot of flak from various fans, critics, and horror hounds for stating that Steven R. Monroe’s remake of I Spit on Your Grave is a better film than the original. I still stand by that. While it took me far too long to get to it, I finally was able to watch Monroe’s sequel I Spit on Your Grave 2 and now I’m prepared to take another round of abuse from fans because this sequel is even better than his remake. I know, I know. I must have gone mad. I liked a remake better than the original? Then I liked its sequel better than that?! Yet, as the credits rolled on I Spit on Your Grave 2, it was hard not to think this. Not only does this one pull away further from the cheesy moments that hindered its predecessor, but it throws in a variety of solid narrative shifts that expand on the themes and formula to make it feel fresher, leaner, and meaner.

Katie (Dallender) has been trying to make it as a model in New York for a little bit now, but making ends meet makes it hard to build her portfolio. When an opportunity arises for a free photo shoot, it’s hard for her to say no. However, the three guys (Absolom, Aleksiev, Baharov) in charge of this shoot seem questionable. Now Katie has been thrown into a world where violence and abuse will turn her into something she never thought possible…

To start off, I have to give it to Monroe that once again he never treats the script or approach to I Spit on Your Grave 2 as merely an exploitation film. The rape n’ revenge genre is ripe for poorly constructed films that just want shock their audience, but he ably navigates the formula and adds some nuanced layering that makes this one a much better film than 80 or 90% of those associated with the genre. He shoots the film in an artistic manner, he uses the score to maximum effect, and he slyly manipulates the audience with slick slide of hand to make even the sillier plot conveniences work. A lot of the dialogue and key moments of uncomfortable shock come back around in a satisfying way and the entire cast seems up for whatever is thrown at them, including our lead Dallender who simply drives home her character’s massive arc from relatable, to hopeless, to justified angel of vengeance. I Spit on Your Grave 2 is a film that rises above its formula to provide shocks to push its audience into a lot of uncomfortable territory, but at the same time give it more meaning and depth.

If anything, the biggest issues that arise in I Spit on Your Grave 2 is that it doesn’t run with some of its thematic smaller plot lines far enough. While the film certainly attempts to fulfill its obligations to the formula with its horrific set ups, nasty villains, and finale that spins the vicious sequences of the first half on their head, the film adds in some unique layering that could have been worked with a bit more. A change of location that happens after the first act is slick to keep the audience on their toes and it allows the film to go further if it wanted to with the idea of being isolated and alone. Smaller subplots that feature a police officer and a religious figure are not developed quite enough to satiate the audience with its themes about responsibility to protect people that they are meant to call into question. It teases these ideas, but never runs with it like I was hoping it would do.

Still, those issues are very minor compared to the effective approach and thoughtful manner that Monroe and company bring to the table with I Spit on Your Grave 2. The film uses its genre build to generate a lot of feelings in its audience without the camp and cheese to get in the way and it never uses its exploitative elements for pure entertainment and instead layers them with meaning and justified existence to tell its story. Perhaps it was the low expectations I had going into the film for being a straight to home video sequel to a remake of a flawed but respectable film that lead me to being so impressed, but I will stand by my claim that this is easily one of the better films in this genre.

Written By Matt Reifschneider
Posted by DarkReif at 4:33 PM

Email ThisBlogThis!Share to TwitterShare to FacebookShare to Pinterest
Labels: Horror, I Spit on Your Grave, Steven R. Monroe, Suspense / Thriller