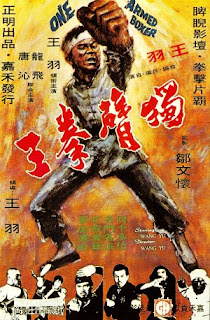 “Hell sent me back. It was too early.”

Recently, I have found myself looking back much more thoroughly at Jimmy Wang Yu’s career and revisiting a lot of the classics I initially threw to the side. It has been quite refreshing. However, there are still a handful of his films that don’t necessarily hit the mark with me like they do for so many other people. One of those films is his iconic classic The One Armed Boxer. Made for Golden Harvest in the early 70s when Wang Yu was really make waves in the industry as a star, writer, and director, The One Armed Boxer is something of a unique blend of styles – at times feeling a bit more like Shaw Brothers production, yet obviously pushing the boundaries like Golden Harvest liked to do at the time. I respect the film and find many set pieces and moments enjoyable. The film as a whole though, it falls a bit flat. It’s entertaining sure, but really The One Armed Boxer is just a mash up for two far superior films he was in previously – The One-Armed Swordsman and The Chinese Boxer – and the resulting mash up isn’t nearly as cohesive or effective as either of those.  It’s good, but hardly as great as its cult status as made it become for fans.

Tien Lung (Jimmy Wang Yu) is the best fighter in his school. His big head and unrelenting urge to put down bullies has made him a target for another rival school though. When he convinces a group of fellow students to throw down with the school in an attempt to stop their brazen behavior, he ignites a serious of horrible events that will leave him without one of his arms and his school in pieces. Now he must retrain himself and take revenge for his school against a slew of strange mercenaries with incredible style and power.

On the surface, The One Armed Boxer is very entertaining. It’s filled to the brim with all kinds of gimmicks. Even before Wang Yu’s character loses his arm, the audience to treated with plentiful fight sequences and two entire “tournament” style sets of challenges that feature some of the strangest martial arts killers placed to film. By the time the second set of challenges comes out, the film starts to drag a bit despite these gimmicks and while seeing an early 70s spin on killer yoga practioners, weirdly unrealistic examples of Muay Thai fighters, or a Japanese martial arts expert with fangs (?!) it almost becomes a bit of white noise built on classic action. Jimmy Wang Yu’s character is decent enough to carry this part of the film with his righteous rebellion, but after a strong opening act the film teeters at going too far with its gimmicks and losing sight of the actual emotion and story for the sake of its entertaining prospects. Still, the first half of this film is packed with plenty of silliness and kung fu clichés to make fans hoot and holler so it’s more or less simply underwhelming rather than terrible.

The second half is where the film actually starts to really work its magic. Quite literally. At this point, there are added characters that actually develop some chemistry with the lead hero, including a romantic subplot that doesn’t quite feel as developed as it should but still works for what is needed in the film, and Wang Yu’s character uses some emotion to power his performance. It’s a little strange that there is something of a fantasy element thrown into the mix as he must soak his remaining arm in a powerful elixir to gain super strength (I kid you not) and to do that he has to horrifically burn his arm so that it’s black for the rest of the film, but at least the film feels like it has a more substantial purpose in driving forward that works better. Of course, we get all the gimmick fighters back for the finale and it’s more useful there to see their tricks and how Wang Yu will have to overcome them. It’s still gimmicky and focused on being entertaining like the first half, but it’s more cohesive and there is a bit more character work that seems honest instead of forced. Again, it’s still a combination of One-Armed Swordsman and The Chinese Boxer, but at this point at least it isn’t dragging and jamming characters down our throats.

When you combine the two halves, The One Armed Boxer remains a fun film with plenty of memorable sequences of entertaining effect. It’s brimming with gimmicky characters and moments and for that, it deserves some credit as a kung fu film. Is it the instant cult classic that everyone claims it is? Meh, it’s actually kind of a hollow film that doesn’t build the emotional resonance of its characters as well as it might have, leaving connections between the hero and his master or the hero and his new girlfriend to blow by in the wind. Still, it’s fun to watch and worth the time if you love those gimmicky kung fu films of the 70s. Truthfully, I prefer its sequel Master ofthe Flying Guillotine which is also brimming with gimmicks, but still hits some of the struggle with more impressive force. Keep a grain of salt with you as you go into The One Armed Boxer and you’ll enjoy it well enough.