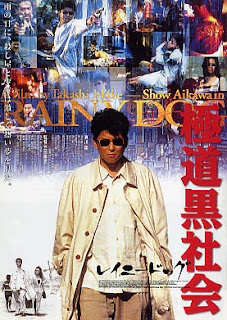 Takashi Miike is a diverse director. His iconic style might include outsider characters defined by unique traits or his use of very intense violence, but that doesn’t stop him from journeying into a slew of different styles and genres. This even goes back as far as his early career. Shinjuku Triad Society, the first of three films included in this Black Society Trilogy set from Arrow Video, displayed his ability to inject his own style into a Kinji Fukasaku style yakuza. The second film in this set, Rainy Dog, takes the yakuza genre into a different direction though. It's one that uses many of the same themes and focuses, but strips them down to the essentials. It delivers a film that still pushes its audience into some uncomfortable areas, but uses its suffocating atmosphere, disconnect, and ultra-vague character and world building to accomplish it. If Shinjuku Triad Society was Miike taking his V-cinema ideas to the next level, Rainy Dog is taking that level and spinning it into a much more artistic and wholly different tone…to some very impressive results.

Exiled. That is what has happened to Yuji (Show Aikawa). A yakuza hitman already on the run and staying in Taiwan, he finds out his group has abandoned him there to make petty cash working for a local triad. To make matters more complicated, he’s suddenly left with a young mute boy who might be a son that he has never seen before. It’s only a matter of time before his life style comes to kill him, but can he reclaim a life in Taiwan that was never his to begin with?

While Rainy Dog might be inherently connected with the other two films in the Black Society Trilogy by themes and concept, it is an entirely different beast than the other two in its execution. Rainy Dog at times plays out like an arthouse drama with the spirit of a Greek tragedy that occasionally slips into the realms of yakuza cinema. Miike handles the entire thing like it’s a small character study instead of the political and gangster power struggles of many other yakuza films and it gives the film a much different tone, perhaps more akin to the films of Beat Kitano of the period rather than Miike’s ultra-violent and abrasive style. It’s this change of pace that really sets the film out and showcases the talents of Miike as a director though. Rainy Dog, at times, will erupt in violence and certainly moves to make its audience uncomfortable with the cold and disconnected humanity of its lead character, but it approaches it in an atmospheric and vague manner that would much rather show the audience through its execution than have to have it explained to them through a narrator or dialogue. Artistic, perhaps poetic, but effective in almost all manners.

This, of course, does not stop Miike from layering the film with enough darker and uncomfortable material to make sure that it feels like one of his films. As mentioned, the lead of the film is a rather unusual character, hindered and still empowered by his stature as an outsider in the setting of the film. Rainy Dog rarely uses dialogue to progress his character, but it uses his interactions with those around him as a way to build his arc. Most, if not all, the characters in this film are of a similar placement to our titular anti-hero, whether it’s his unwanted son who would seemingly follow his father into the jaws of hell despite the fact that his father is less of a parent than the mother who haphazardly disposes of him to a ruthless gangster whom she barely knows (paralleled by Yuji not even remembering her name) or the prostitute that he connects with on some base level as someone used by the men around her, looking for hope in a faraway city. Rainy Dog is a film about those outcast and burdened by their lives who still find some kind of hope outside of the violence and fear that rains down on them like the actual rain that plagues them in the film. It’s these characters and Miike’s choice in how to handle their interactions and movement, not to mention the brilliant performances, that gives the film a life outside of its vague plotting and darker subject matter.

Rainy Dog is not necessarily a film that may appeal to those more in tune with the portion of Miike’s filmography that focuses on gimmicks and horrific violence. Instead, this a drama that would rather take its short bursts of violence to break the sadness and quiet moments of reflection about the dark days of these characters who are looking for the sunshine ahead. It’s executed to near perfection, using its settings, performances, and pacing to build the “tragedy of an outsider” in full without compromising anything in the meantime. While all three films in the Black Society Trilogy are certainly worthy of viewing and this one may not be quite as ‘entertaining’ as the other two, Rainy Dog might be the masterpiece of Miike’s early career that is far too often overlooked for his more abrasive films. 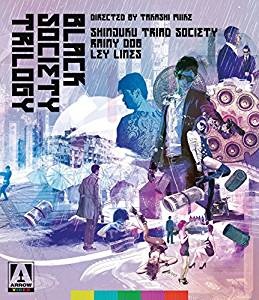 Written By Matt Reifschneider
Posted by DarkReif at 9:19 AM