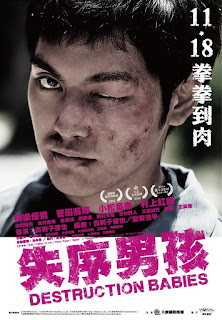 Destruction (Distraction) Babies is officially one of the most nihilistic pieces of work I've ever witnessed! Taira (Yuya Yagira) is a young man on a swift path of desctruction. The opening features him beating and being beaten to a pulp. He gets up, brushes off, and goes at it again. Rinse and repeat over the next 108 minutes and you have this film done. I could essentially say nothing further, and just recommend the film, but that defeats the purpose of a review.

Taira has a brother named Shota (Nijiro Murikami) who spends the movie in search of his violent brother after he leaves their small hometown, to set the world ablaze. The movie never really develops a plot, nor are there any likable characters, whatsoever. That is what works about this film so well. Everything is so cold, so heinous, and absolutely disgusting, that you can't help but be pulled in. It's the whole "I shouldn't have scene that", but for an entire movie. It's exhausting, and honestly a tough watch, but it is so well made, and so intense, that the movie demands your attention.

Fighting in this film isn't like most Asian films people are generally familiar with. There is no martial arts, no choreographed throwdowns (well, clearly they had to be designed somehow), but instead we get an onslaught of bare knuckle beatdowns... one after another, after another... after another. Taira is perhaps the darkest, most self-destructive protagonist I've seen in any film before. His only purpose is to destroy those around him, and he does just that.

Along the way, he runs into, beats the snot out of, and pulls some other characters along the way, even picking up a sidekick of sorts, in the form of a young schoolboy, Yuya (Masaki Suda), who is the only character with much of an arc. He starts off timid and scared of the violence around him, yet he is drawn in by its chaos, and slowly starts to embrace it. Perhaps this is a social commentary on how easily we as people are consumed by these animalistic desires we sometimes have.

I truly believe a lot of people will be turned off by, or absolutely hate this film. There is a lot of violence towards women, which I could see some having a problem with, but the point is that the man attacking people, spares no one. He has no heart, and cares not who lays in his wake. Everyone is a target, plain and simple.

The cinematography here is nice, featuring lots of long takes, especially during the fights. Everything feels very raw, which adds a huge layer of realism to it all. Also, on a smaller note, the music is a mix of rock and metal, and adds to the tone of the film, giving off some nice 9 Souls (Toshiaki Toyoda) vibes.


In the end, there isn't a ton to say on this one. It is what it is, and that is one big bloodbath of a film. It's not enjoyable, it's not entertaining, nor does it strive to be. It doesn't really answer any questions you may have by the end, and might even leave you pissed off. It is a bleak, dark, depressing punch to the gut, over and over again, until the very end.