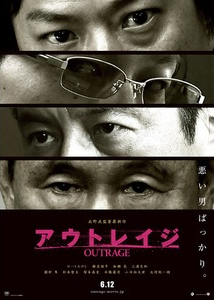 
Upon my second viewing of Outrage, I still feel a bit conflicted about the film. On one hand, Takeshi Kitano handles his "comeback" to the yakuza film with a very intense and precise touch. The film is very vague in its build, rarely giving exposition outside of assumed connections from the audience, and it bops around a variety of characters as it pieces together its plot about the rising internal strife of a larger yakuza family. To its benefit, Outrage is brimming with fantastic performances and the tone is suffocating in how it presents itself with surgical precision. Kitano might have branched out from yakuza films in recent years, but really this is the kind of comeback to the form and style that it was made out to be and in that kind of execution it’s right in line with expectations.

However, Outrage - despite its title - is almost a film that's too cold and calculated. In a manner, one might assume that this is Kitano's commentary on the whole narrative. These yakuza are almost inhuman in their viciousness and emotionless interactions. Only some of the secondary cast, a police officer and an embassy worker, seem to have any kind of heightened emotional investment in the events that are transpiring. It leaves the film a bit disconnected from the audience and only becomes intense in its emotional moments during its bursts of horrific violence. It's artistic, but a bit too cut and dry to really strike a chord with its audience. I love the idea of Outrage, but it's almost too invested in its detachment to reach the audience on a level it could have and rides on the execution of its idea to be as strong as it is. 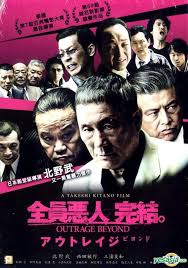 Considering how the original Outrage felt like it told the story it intended to tell, I was hesitant to leap into this sequel. Fortunately, Kitano not only makes it work as a sequel, bringing back a handful of characters and the style of the original for another round of yakuza political drama, but he actually improves on it. This is key to understanding how the film brings the story full circle, leaving enough uncertainty to continue if Kitano deems necessary, and it really shows that as an artist he could look at the last one, see what worked and didn’t work, and attempt to address those issues. The result is that Beyond Outrage (or Outrage Beyond, if you go by the actual title on the film) is a film that’s better than its predecessor.

Part of this ability to craft a better film comes from the use of three characters that come back from the first one as slighted people looking for some comeuppance. The first one suffers from a disconnect from the characters as its backstabbing story plays out, but since the audience has already spent time with these three, including Kitano’s Otomo fresh from prison, the connection is stronger and the emotional cleansing that they seek by pitting two major yakuza groups against one another feels dirtier and more energetic. The style of the film remains the same, including the same very impressive set of performances and visual style, blinking between sequences of the plot as it comes together, but just with a slightly grittier feeling and bursts of violence that make this one feel a bit closer to the “slice of yakuza life” that Kinji Fukasaku used in his Battles Without Honor and Humanity films. This move gives it a new sense of intent. Beyond Outrage is still a film that uses Kitano’s style and artistic balance, but in the end it improves by being almost cathartic for the audience who sat through the original and it makes many of the themes come full circle. Here’s to hoping that the announced third entry is just as good as this one.