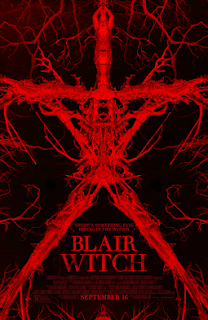 When the trailer for The Woods first showed up online, I had a friend of mine bring it up in one of our movie discussions. “It looks like a Blair Witch movie,” he said. “Nah. Adam Wingard wouldn’t touch that franchise and why would they bring it back now? The second one killed any kind of hopes for a series,” I replied. Turns out I was wrong. Dead wrong. Never underestimated Hollywood’s new need to capitalize on nostalgia, I guess. The Woods was then revealed a short time later to be a secret Blair Witch sequel, cleverly titled Blair Witch, and was meant to reboot the franchise and bring back ‘one of horror’s scariest movies’ just a few years short of 20 years from when the original Blair Witch Project capsized the box office. Still, the first two films don’t necessarily hook my attention and even the addition of Adam Wingard and Simon Barrett didn’t perk my interest enough. Now that Blair Witch hit home video, the franchise whore in my just had to finish off my collection. Oddly enough, Blair Witch just might be my favorite one. It’s a bit tedious in the first half in its replication of the style and set up of the original, but when it finally picks up momentum it hits some of the potential this franchise has been missing. Who knew?

James (McCune) has been obsessed with finding his missing sister. When a new video shows up online from the Black Hills area where she disappeared while making her documentary, he convinces his friend Lisa (Hernandez) to document his travels with his friends to find out where the tape was discovered. That is, until they all realize that the legends about a witch in the woods just might be true.

Considering its less than stellar box office numbers, Blair Witch turns out to be a decent little horror flick that was deserving of a bit more. When compared to the atmospheric and intense competition it had to go against in 2016, it’s not surprising that it feels a tad unfulfilling, but compared to the previous entries it kicks things up a notch in intensity. In a way, it takes a lot of the foundations of the original film and then fixes many of the issues it had – namely being pretty damn boring. This is what makes the first half a bit more tedious than it might have been. The plot is stripped down to its essentials as another group of young adults look to make a documentary out of one brother’s search for his sister who was lost in the Black Hills forest. Blah blah blah. The protagonists are your average group of twenty somethings and the film, in an attempt to keep things streamlined and moving, doesn’t build them enough to really get the audience to care. A couple of additional characters are added to kick off the second act, guides with questionable intent that cause a bit of strife in the group – not unlike the gimmick of the main character from Blair Witch 2. The main problem is not that this trims the fat here, moving at a wicked pace to keep the audience interested when the characters themselves are not interesting, but that it’s almost too familiar. It sticks to the formula and style of the previous entries a bit too closely and it doesn’t have the execution to get away with it. Oh look, it’s people rubbing one another the wrong way. Oh look, they added a drone, but really that doesn’t seem to be worth anything to the plot. It’s the same old, same old and Blair Witch doesn’t add enough new material or strong enough execution to make it feel as strong as it might have.

Then something magical happens. The movie shifts gears in the second half and while starting off with some of the same “scare” tactics of the original film, it starts to maneuver into new territory or new ways of looking at similar scares and themes from the original. This is where Blair Witch redeems itself. Like the original, many of the scares and new pieces are hinted at in the opening scenes (a nice touch) and it really cranks up the intensity of the film. A seemingly timeless blend of day and night and a vicious rainstorm in the third act make the setting feel more tense and suffocating and while Wingard and Barrett don’t ever “show” many of the things that go bump in the woods – their hints and brief visual spooks actually give the film a much more intense and visceral tone that makes the consequences of the characters’ actions feel more effective. To give away much more of this second half would be doing Blair Witch a disservice to how strong it is and how it makes up for a lot of the issues in its first half, but it does take things to a new level for the franchise that kicks this entry into being the best one.

The subsequent disappointing box office numbers will probably mean that Blair Witch is the last of this iconic series, but it’s a sad statement when Blair Witch showed a lot of the potential it had to modernize the found footage style and breathe innovative life into it with its new tricks and strong sense of gimmicky horror. While the original still holds the mantle as being just different enough to change how horror worked for its era, Blair Witch improves on many of the aspects that have not held up with time. Initially I was skeptical to why Wingard and Barrett would touch this franchise, but after seeing what they could pull off I feel disappointed that they were not able to convince the horror crowds to embrace it. Perhaps the found footage style is just dead in 2016, but give them credit for trying to revitalize with just half of a movie.