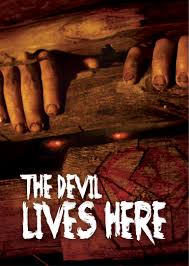 I can honestly say I’ve only seen a handful of Brazilian movies and none of them were horror. Then again, that’s the benefit of a company like Artsploitation who digs through so many foreign horror films to release them in the US. Some of their titles can be hit or miss, but I’m bound to be entertained by what they have found recently. This includes seeing my first Brazilian horror flick, The Devil Lives Here. With no expectations going into the film, to be perfectly honest I had never heard of it until Artsploitation announced its release, The Devil Lives Here is a fantastic little low budget horror flick that blends cult horror with haunted house, slasher, and possession pieces. Running at a brisk 76 minutes, it never over stays its welcome, it builds a solid mythology, and keeps things moving. I’m not sure what else one could ask for from a film like The Devil Lives Here.

Old friends Jorge (Goullart) and Apolo (Carvalho) are heading out to an old house that they used to visit with their families and they’re bringing a couple friends (Cortines, Verdier) with. Both of them know the legends of the house and how no one was allowed to stay in it for one night of the year and it was enforced by the old house keeper. The house keeper is now gone and they decide to test the superstitions to see if they were true or not. When two young men (Caetano, Frazão) show up to finish a decades old ritual though, the night is going to get a lot more horrific than planned.

The Devil Lives Here opens in a rather interesting manner. It establishes what accounts as three story lines. One featuring our young protagonists looking to scare their prospective girlfriends by staying in a “cursed house,” one that features two young men looking to finish the house ritual, and one with a very intimidating gentleman who seems to be obsessed with bees and ants. Don’t fear though, with its brief run time, the film hardly spends too much time in exposition. All three plots quickly come together by the end of the first half hour and the plot congeals to move forward with its horror story. It can be a bit confusing at first as the film doesn’t necessarily lay things out for the audience, but it works to create a dynamic that builds a lot of the myth of this house and the ghost story that plagues it.

From there, the film tends to movie in a much more straightforward manner. The four young protagonists of the film shake off the cliché slasher set up pretty quickly, thanks to some subtle character building and solid performances, and the film then shakes things up. As mentioned above, The Devil Lives Here actually ends up blending a handful of horror genres into the mix – throwing in some slasher moments, a few fun haunted house scares, and the cult ritual that acts as a hinge for all of it – and directors Gasparini and Vescio ably navigate it with remarkable ease. The use of yellow lighting to contrast the deep blacks of the visuals along with a hint of Sam Raimi inspired camera work makes the second half of the film feel atmospheric and tense even when the script starts fringing on some illogical moments. It hooks the audience with its genre bending to keep them guessing what is going to happen next and while I’m not sure the ending makes a ton of sense (the villain of the picture is generally horrifying so the swaying set of rules around him are not too distracting,) it was so well executed getting there that I’m not sure it’s a detriment. The style occasionally overtakes the substance at this point, but it’s effective nonetheless and makes for a great little film.

Considering how there were no expectations going into The Devil Lives Here, I’ll have to say that I’m still massively surprised at the quality of film on display. It’s occasionally a little underwritten, but the execution onscreen more than makes up for it. It’s stylish in its visuals (the use of the flashers on a car to craft atmosphere is perfect), the performances are all solid to impressive, and the genre bending of its concept makes for a film that never seems as predictable as it might have been on paper. The Devil Lives Here is another one of those horror gems that Artsploitation has unearthed for fans in the US and it comes with a hearty recommendation from us.