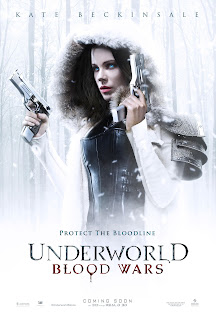 There were a lot of problems with Underworld: Awakening, the fourth film in a series that has seemingly found a cult audience that continually shows up to make sure it survives. The budget ballooned to $70 million, it lost sight of the world building aspect that made the series fun and layered, and despite some silly fun action it had little foundation for taking the series in a new direction that worked. So, for the most part, the fifth entry, Underworld: Blood Wars, attempts to fix all the things it fucked up. It’s an admirable approach. They cut the budget in half and refocused the storytelling to try and get it back to basics while using the plot and characters from the fourth one as little as possible. Blood Wars is hardly a great film (hell, not a single entry in this series is), but for what it’s worth I was thoroughly entertained by it and admired what they attempted to take the series. Flawed, yes, but it’s a step up over the fourth entry and gets the Underworld franchise back on track. I call it a success.

Selene (Beckinsale) has been on the run after she uncovered a lycan conspiracy to use her daughter to create super-wolves. There are only two covens left and the leader of the Eastern Coven Semira (Pulver) wants to try and bring her in. Not for trial for killing Victor (seriously, get over it vamps) but to train a new generation of Death Dealers in a battle against a new and monstrous lycan leader Marius (Menzies) who is after Selene’s daughter to finish making super-wolves…or something.  However, not is all that it seems and she is going to have to rely on her new friend David (James) to help her navigate this new world.

In an attempt to get the after taste of Awakening out of the audience’s mouths, Blood Wars does two things pretty much right away. They get rid of Selene’s daughter, who is a story element and pretty much only shows up in flashbacks, and they shake off a lot of the ‘future world human hunting’ aspects that were prevalent as an antagonist to the plot. It’s a little hard to digest at first as the film essentially must reboot the franchise (again) in the first twenty minutes to reintroduce David and his father, played with wonderful screen presence by Charles Dance, and set up the rekindled war between the remaining vamps and woofs. It’s rocky at this point with a very quick and dirty recap to start things off and a lot of exposition to set up the pieces in this chess match. Stay with it though because once they trim the fat of the fourth film and set up the meat of this one, Blood Wars does start to work in some fun ways.

One of the bigger changes that happens in Blood Wars is that they establish David as more of a co-lead than anything else. To build his character and a plot, they start world building again on events from the first three films too. There are some fun narrative pieces about blood lines and new leaders laid out to give this franchise a second wind and the inclusion of the Nordic Coven makes for a lot of fun new building ground for the film to explore. Particularly because these Nordic vampires are more peaceful and religious vamps with white hair and big ass fur coats (which I like to think are made from the skins of lycans – although that’s never actually said) which gives the film a new look to add to its gothic tones. These choices to build a second lead and establish a new style of vampire are not embraced to the degree that the film could have, but the fact that it lays that ground work is a step in the right direction.

It’s not embraced because Blood Wars moves at a wicked pacing to keep the action flowing and the audience from thinking too hard about things. Like most of the films in this series, it relies on its charming and over the top characters, along with its stylized action, and the visuals to make up for its scripting errors. Beckinsale once again slips right into the role of Selene, but it’s a lot of the secondary cast that really shine here. The two main villains, Pulver as Sermira and Menzies as Marius, both seem to delight in their roles and do it with plenty of evil charm to spare, while James steps up nicely to be a potential co-lead for the series. Director Anna Foerester, in her feature film debut, ably handles the style of the series, although her knack for crafting visual action is not nearly as fine-tuned as Wiseman in the original films or as silly fun as the guys that did the fourth one. She handles the film well and with a much smaller budget (in this day and age, it’s damn near a small budget for an action franchise) she gives it a slick style that works.

There are still a lot of flaws with Blood Wars that prevents it from being a great film including at how haphazardly it ends, but truthfully if someone is a fan of the series already then this will perfectly satiate the bloodlust for more from this cinematic universe. It’s stylish, fun, and it adds just enough new material to give the series a second wind after the last film failed at reigniting a new era for it. It’s hardly one of the best either, succumbing to its trimmed pace that boggles the mind and patchy attempts at moving on from the botched writing of the last one, but I had enough fun with it that I will gladly continue to support future installments if this one does well enough. If you’re looking for a fun early popcorn flick in 2017 or are even remotely a fan of the series, then Underworld: Blood Wars fits that space perfectly.