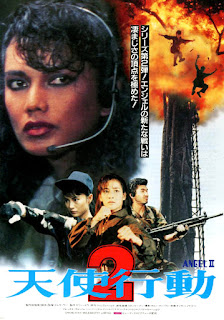 While many Hong Kong and Chinese films remain stuck in a purgatorial state to find a decent release in the US, there are many films that deserve a bit of attention that don’t properly receive it. The film Iron Angels (you can read my review HERE) and its sequels are a franchise that should be loved and yet remains strangely off grid. For the first sequel, Iron Angels 2 or many of the various alternate titles it was released under, I was able to watch the film via Amazon Prime in one of the more exciting finds I’ve had while digging through the underbelly of the streaming service. If you’re a Hong Kong action fan, then I highly suggest, if you have it, to go watch Iron Angels 2 immediately. It’s one of those films that doesn’t necessarily rise above being an entertaining action flick, but it doesn’t have to because it’s just so ridiculously entertaining. Win, lose, or draw, Iron Angels 2 is a blast to watch and it damn near matches the original in that category.

The Iron Angels are finally off duty from kicking ass and taking names to go on vacation. Lucky for us, they happen to take their vacations together (?!) but their company paid trip to Kuala Lumpur becomes a bit awkward when Alex (Alex Fong) meets up with an old friend (Chan Ting-Wai) and they are invited to his massive estate. Things are almost too good to be true though and when they uncover that he’s being secretly watched by a variety of various intelligence agencies, the Angels must put on their ass kicking boots to stop an old friend from being a horrific new enemy.

As far as I’m concerned, there isn’t a whole lot of material in Iron Angels 2 that feels original, fresh, or all that unique. At its core, this HK actioner is the kind of film that hits all the clichés, structures, and beats that are needed for a film like this and it doesn’t do a whole lot to expand on that. Fortunately, this is not a problem here. Iron Angels 2 is a film that surely had no intent to do much more than entertain its audience and it does it with enough charm and fun moments that it’s hard not to be sucked into the silly world of spies that this film inhabits.

This charm extends itself mostly to its casting and how the film treats them. An entire sequence in the first act, which is easily the roughest part of the movie as it must quickly get the audience caught up with the characters and why they are where they are, includes the most random car chase and fight sequence just to introduce us to Alan’s friend – and future villain of the film. It’s out there. Yet, the film does it in such an entertaining manner that the audience doesn’t quite question the why as long as the who and how is told in the manner that this film does it. From there, Iron Angels 2 throws in a some interesting side plots about the CIA, a little romance, and a bit of political story to try and give a why to it all without working too hard, but most of these are excuses to use charm and emotionally power the next action sequence that it is desperately moving towards.

Action sequences are where Iron Angels 2 shows exactly why you watch a film like this. Whether it was the previously mentioned car chase of the opening, the bar fight that is supposed to be character bonding, or the Rambo approved jungle set, explosion heavy finale, this film earns its Action Scout badges in this field. If you’ve seen the original film, you already know how capable the three leads are as action stars, but Iron Angels 2 takes it to the logical next step of bigger than life spectacle. There is plenty of hand to hand combat and gun fights, but the way that director Teresa Woo threads in various styles, leaping between them in the final act is glorious in some of the best Hong Kong action ways and it leaves the audience grinning ear to ear by the end.

Truthfully, while I give Iron Angels 2 the same score as I gave the original, the one thing it has trouble matching is in the villain category. Because of the way that the story plays out where the villain becomes a character that the audience somewhat connects with on a humane level, it lacks that badassery that the first one had and the consequences that came with it. Instead, they try to replace it with having our Angels fight off an entire army and while it leads to some great fights and spectacle, it’s lacking even when they try to recreate it in the final moments of the film.

Iron Angels 2 is one of those long-lost gems that truly entertains as much as it can, balancing fun characters with outrageous action that’s shot to be as fast paced and enjoyable as possible. Who knows how long this missing film will be on Amazon Prime, but for those HK fanatics who want a new franchise to adore, then I can’t recommend Iron Angels 2 enough. Sure, on a classical film rating scale it might be a bit lacking in story and meaningful emotional attachment, but when I’m watching knife fights in a river or rescue attempts from a jungle tower where bad guys come armed with bazookas, I’m not going to complain too much.