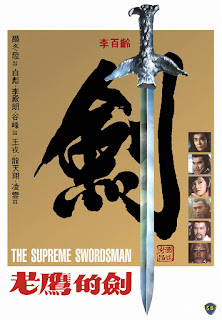 I’m always down for some Shaw Brothers wuxia films. Even as the 80s rolled on and their wuxia films became crazier and stranger, most of them retained entertainment value with their fantasy aspects and polarizing tonal shifts. With the Derek Yee starring flick The Supreme Swordsman though, there is both classic wuxia set ups and the crazy off kilter wuxia that the studio became increasingly infatuated with as the years rolled on. While the film tends to receive a decent amount of praise from fans, it’s ultimately a mixed effort that sets up and ends on some phenomenal ideas and characters, but uses some questionable tactics to get there.

Qin Wu-Xin (Jason Pai Piao) will not be stopped. He has used his Black Magic Clan kung fu and unstoppable swordsmanship to cut down some of the greatest swordsmen to take their swords for his collection. He’s almost reached 100 swords, but to defeat his last rival – The Supreme Swordsman – he must find a sword that is worthy of the battle. This leads him to Xie Yan Bei (Derek Yee) and his father (Ku Feng) who will have to figure out just what Qin Wu-Xin is up to and stop him if he doesn’t stop his quest for power.

The set up for The Supreme Swordsman is awesome. It harkens back to the earlier 70s style wuxia films from the Shaw Brothers as it spends a generous portion of time establishing the film’s villain, played with screen stealing gusto by Jason Pai Piao, and getting into its foundational plot of the martial world and all the challenges that come with being one of the best. This establishing of characters and plot bleeds out into the true protagonist of the film Xie Yan Bei who connects with the audience fairly quickly and even extends to a ton of the great secondary characters that beef up the dramatic tension and thematic pieces of the story. As the film plays on, the building momentum between the power-hungry villain and Derek Yee’s wide eyed youthful hero stands to be one of the better set ups in a Shaw Brothers wuxia film. It’s well executed, outside of the strangely sped up sword fight sequences – which is more of an gripe than a true issue, and The Supreme Swordsman was on a path to be one of the best.

About half way through the movie though, something strange happens. Instead of running with what was working for the film, it decides to take this wild tangent that changes the tone and style of the film. At this point, the film hits the required “hero must retrain to defeat the superior villain” part of its story, but for this section it adds in a slew of new characters and abandons its more grounded and serious tone for a group of teachers that are slapstick comedy and adds in a ton more fantasy elements (and a weird section that’s even comparable to a horror movie tone). Fortunately, it only lasts about 20 minutes before moving back to the original tone of the film for the finale – a fantastic finale and a wonderful fight sequence at the end. So just grit your teeth and take it as it is, try to have fun, and things still turn out all right.

The problem remains though that this 20 minute shift in tone does undermine what could have been one of Shaw Brother’s best wuxia films. The Supreme Swordsman is still impressive outside of that though, powered up by its phenomenal cast and intent to build a brilliant villain and hero dynamic, so it still comes highly recommended as a martial arts film. For those fans out that that don’t mind the comedic shift in the beginning of the third act, then it comes highly, highly recommended.

Written By Matt Reifschneider
Posted by DarkReif at 10:11 AM