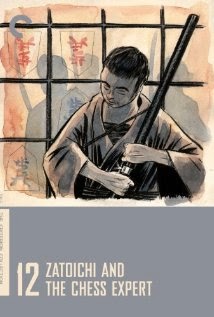 
“You have to understand, Otane. The man you’re looking at is dirt. And everyone who comes close to him or touches him, in one way or another gets muddied by that dirt. There’s nothing I can do about being dirt myself, but I don’t what you to get mired in my dirt.”

With a title like Zatoichi and the Chess Expert, one would think that there would be something of a chess based running theme throughout this twelfth entry of the blind swordsman franchise. Yet, the film actually plays down the titular character so that he becomes a sort of looming question mark for the film. The rest of this adventure of our cane wielding hero is actually a sort of throwback film to the more emotional beats we saw earlier in the franchise and it plays up a lot of the gray areas for the characters and plot – a move that I am completely behind.

Zatoichi (Shintaro Katsu) continues to find himself on the road with a variety of different groups after the significant bounty on his head. When a game of dice goes wrong and a young girl is injured in the process, he takes it under his guidance to help out the young woman and the girl to find medicine and get to their destination – and a strange chess obsessed samurai seems intent on tagging along for the right.

While the Zatoichi franchise as seen its fair share of interpretations of a similar formula in a relatively short time, The Chess Expert seems intent on telling a strong story with deeper characters and interactions then we have seen in the last few entries. As I mentioned in the opening paragraph, this round is less straightforward then the title would indicate with its sort of Zatoichi vs The Chess Expert vibes. In fact, the plot (similar to the last entry Doomed Man) seems almost a bit scattered at times as it takes its time to establish all of the pieces in place. Subplots about a torn up clan, the woman and the young girl, the foreboding chess expert, and a brother and sister vengeance plan all encompass the film. It creates this atmosphere of gray area in many of the character choices in the film. Zatoichi is shown as a cheat who plays his disability up to fool those who aim to take advantage of him, the Chess Expert is a man who seemingly does all the right things to help out our hero and his guests but is obviously the sort of character who would cut anyone in his way down, and even most of the secondary cast is shown as two faced individuals who say one thing and exist as another. It’s ultimately more of a satisfying film as it strays away from being a film about Zatoichi the Helpful and Just.

It also hits home this idea that Zatoichi is less of a protagonist for his own existence and one that merely reacts to the terrible situations that arise and when you see some of the more impressive emotional beats of the film (particularly a sequence where the woman he is ushering declares her love for him that the opening quote is pulled from) it hits home a bit harder than what we have seen from the series in a while. The plots do all come together in the last act quite nicely and although I wish the big finale was a little bit bigger, the way that it plays out is impressive.

Intriguingly enough, the weakest aspect of The Chess Expert is in the action area. Director Kenji Misumi has an able hand at the narrative, the deeper characters, and the complex intertwining themes, but he lacks the pizzazz in the action set pieces. The finale tends to be a little short winded and the mounting tension between Zatoichi and the Chess Expert sort of flash bangs instead of succumbing to the epic final match the audience is teased with throughout. There is one action piece at about the half way point of the film as Zatoichi must ditch assassins on the road while returning some medicine that packs some solid visuals of the setting and even pumps a solid (almost) heartbreaking moment at the end.

I didn’t necessarily have high expectations going into Zatoichi and the Chess Expert with its sort of gimmick inspired title, but the resulting complex story telling and emotional whiplash delivered in the film makes it one of the best of the franchise thus far. The execution is impressive in many aspects and fans are going to really enjoy this for its deeper attempts for the characters and the world of our hero. This one comes highly recommended.