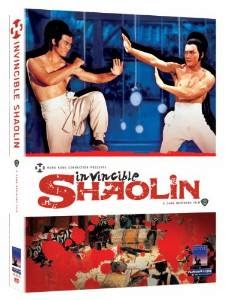 “Ask this fruit merchant how much a brave man costs.”

After partaking in the rather disappointing The Trail of the Broken Blade, I felt it was time to go back to ‘classic’ Chang Cheh martial arts and revisit one of his fan favorites Invincible Shaolin. This was one of the first Shaw Brothers movies I watched back when I was first starting into the genre and at the request of some readers – it was high time to head back with the Venom Mob. While this flying feet and fists extravaganza has its flaws in story narrative, the resulting blend of political intrigue, dueling clans, and classic kung fu tropes makes for a massively enjoyable flick.

When a general asks the two Shaolin schools to each send their three best to be kung fu instructors for his army, he knowingly sets up a rivalry that will violently play out. When the three teachers from the North are blamed for killing three fighters from the South, their master vows revenge. He sets it up so that three new fighters will be sent to take vengeance – this time training them all to win.

At its foundational levels, Invincible Shaolin is a fairly standard kung fu film. Motives of vengeance, extensive training sequences, and gimmick riddled fighting all make up the core of what this film is about. With a strong cast made up of the Venom Mob, who continue to impress with their charm, chemistry, and physical on-screen prowess, and under the direction of Chang Cheh, Invincible Shaolin proves to be a massively entertaining flick in this regard. The fights are delightfully fun throughout and they do take a rather emotional turn in the finale – which includes those patented Chang Cheh bursts of violence and gore, so that this film ranks up there right between the seriousness of The Five Deadly Venoms and the ridiculousness of camp included in Crippled Avengers. If anything, this flick succeeds as an entertaining romp.

Outside of the basics though, Invincible Shaolin does have some strange narrative choices. After starting the film's first act with the Northern Shaolin instructors as the protagonists, it takes a turn in the second act to focus on the South Shaolin avengers as the protagonists. This shift also comes with an intriguing slide in plot as the first act establishes a sort of murder mystery for the Northern instructors with the question 'who really killed their rivals,' but the second act focuses on the training. While the training sequences are a staple of the genre and a sort of fan pleasing aspect, it does take away from the bigger plot. There are a few times that it switches back to the Northern instructors and a sort of budding romantic subplot (which is fun, but rarely as emotionally effective as it should have been), but it’s not enough to really push it forward and it seems forced. By the time the two different plots reconnect in the third act, the viewer knows the outcome because the film has lost its depth. If it wasn’t for the shared chemistry of the Venom Mob onscreen and their ridiculously effectual charm and dynamic fight work, Invincible Shaolin would have lost a lot of steam at this point. Luckily for us, they really do pull it off even if the film’s narrative and plot crumble from beneath them.

As a kung fu fan, Invincible Shaolin certainly caters to the pleasing aspects that I have come to love and expect from the genre with its plentiful and dynamic fighting, strong characters, and gimmick riddled training sequences. It does however stumble when it comes to its plot and narrative, sacrificing what could have been a very emotionally punctuated concept and throwing it on the backburner for those classic kung fu tropes. Kung fu fans will find things to love for sure, but those of a more discerning taste might not be as fulfilled as promised by the stunning cast, director, and pledges of story.