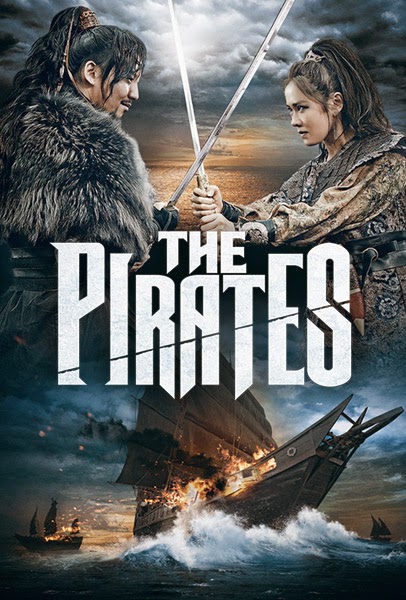 “I told you to find another job. What pirate gets seasick?!”

For a long time, many foreign markets struggled to match the pure spectacle of the ‘Hollywood blockbuster.’ Whether it was a lack of budget, lack of sales, or lack of technology, these markets could never quite match the epic and big scales of these type of films. However, in the last decade or so, the Asian market has exploded as a film force to be respected and in that time they have stepped up their game to reach the ambitions of creating their own ‘blockbuster’ type films. This is where The Pirates falls. On the surface level, this high-spirited adventure comedy looks like South Korea’s answer to the Pirates of the Caribbean films. In a way it is. However, The Pirates works on a lot of levels greater than even their American counterparts could – mostly thanks to a unique and rather specific execution of the idea.

As a new country is being founded in 1388, a poor choice by the officials leaves the royal seal swallowed by a whale. To make matters worse, the panicked government decides the best course of action is to put a bounty on the whale and hires various groups to bring the royal seal back. The various thieves, militants, pirates, and agents are all ready to get their hands on the booty…but at what cost?

There is a trick to understanding and appreciating The Pirates. Upon my first viewing of the film, I had no idea how much of a comedy it really was and for the first half of that viewing I was a bit fuzzy in how I enjoyed the film in comparison to my expectations. On second viewing though, the humor is absolutely spot on. The timing is damn near perfect with some of its editing for comedy and there is a lot of – pardon the obvious pun – fish out of water elements that play out efficiently here. The group of bandits who decide to take to the seas in search of a whale leads to some hilarious results, including a sequence where they see their first shark that had me in tears on the ground. Even better is Yoo Hai-jin’s ex-pirate character and his attempts at explaining the sea to his new bandit colleagues. The man simply owns when it comes to intense comedic delivery.

However, The Pirates is not all comedy. Underneath the high energy and well fitting hijinks lies a film that really does work as a big scale adventure tale. There are a slew of different plot lines that exist separately in the first two acts and slowly come together for a massive (and dare I say rather explosive) finale. While the main portion of the film follows a brotherhood of pirates lead by the subtle acting strength of Son Ye-jin as their captain there is another main plotline that follows a group of ill-fitting bandits led by the screen eating charm of Kim Nam-gil. This allows The Pirates to have a multitude of layers. It introduces us to two separate villains, a political subplot, and injects enough action to keep us entertained throughout. And the action is awesome. For a pirate movie, one of the silliest – and perhaps most memorable – set pieces comes during a chase through a village while transporting explosives that includes a sort of giant water wheel of death. Sound ridiculous? It is. In all of the best ways.

At times, there seems to be almost too much plot and too many characters. During the first viewing, many of the secondary characters blended into one another and the film tends to run a bit long. In fact, there is moment just over half way into the film that really feels like it’s building into a finale, only to have it sort of side track itself as our two main protagonists are left for dead and chained together for a period that seems to drag just a bit. The film also suffers from being almost too ambitious. While the action is impressively filmed and the combination of martial arts, spectacle, and gun fighting is charming, it relies quite a bit on CGI that just isn’t quite up to par with Hollywood standards yet. They are minor complaints, but they are something to be aware of nonetheless.

The Pirates, in the end, is a film that certainly strives to be a blockbuster action flick and succeeds on almost all of the levels. The story is epic in nature, the blend of action, comedy, and dramatic undertones works in spades, and the film is simply built to entertain throughout. Sure it has a few issues with its structure and its execution of CGI, but the rest of it is damn near perfect. If there were any film that I would want South Korea to franchise the hell out of, it would be The Pirates.

You heard me, Lee Seok-hoon. Give me more. I want more.