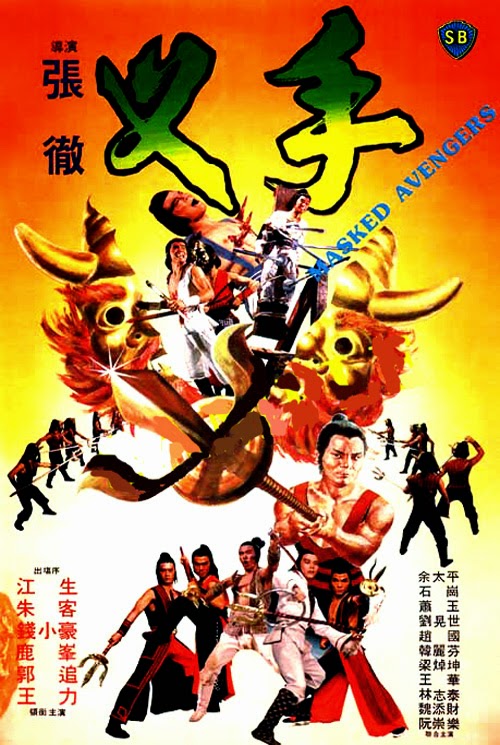 The greatest part about Chang Cheh’s filmography is that the man is pretty diverse even while working within the confines of the Shaw Brothers studio. He can deliver a thoughtful and dramatic flick (The One-Armed Swordsman) or he can deliver an utterly over the top, outrageous gimmick film (The Crippled Avengers) and succeed at both. Sometimes he balances the two stylistic approaches within a single film, like for the Masked Avengers, and still finds a way to make it work. For this Venom Mob flick, he takes a super dark and serious story and injects just enough fun and outrageousness to make it fit in a surprisingly charming way.

A team of hired guards has been tasked with finding, disrupting, and destroying the vicious gang known as The Masked Avengers. When one of their own is found dead at the hands of this evil and villainous group, they find themselves in a small town with a variety of suspects they believe to be the golden trident wheeling chief. Will the various kung fu killers end up making fertilizer of our heroes before they can solve the mystery?

Masked Avengers is a shockingly brutal and dark film. Chang Cheh has never been shy of violent material and he certainly has toyed with the darker elements of storytelling, but there are a few moments in the film that borderline on horror genre bending. When the viewer is first introduced to the titular evil clan (more like cult) they are celebrating the death of the trespasser from our heroic group. By celebrating, I mean they ritualistically hang him on a statue, impale him with their unique trident weapons, and then drink wine that is flavored with the blood that is pouring from his wound. Yeah. No shit. This kind of almost torture like killing is a theme throughout (spinning men hung for target practice for example) and the villains with their bright red outfits and demonic masks make for some of the best villains I have seen in a Shaw Brothers flick. Masked Avengers is brutal throughout too – a man is doused with acid, yeah – so keep that in mind going into this film.

From there, the film does play up the usual kung fu tropes. The Venom Mob (including a few newer faces) strut their usual charming stuff in most of the bigger roles. Chiang Sheng does seem a bit miscast as the leader of the good clan and lacks the strong maturity and leadership abilities to pull it off, but the rest of the casting is spot on. Strangely enough with such a talented fight cast, Masked Avengers does pull away from the bigger fight spectacles in the first two-thirds to focus on building the characters and story. There are a few here and there, including a fun failed assassination attempt, but it really does save all of that energy for the finale…

…a finale that is fuckin’ phenomenal. Not only is all of the time spent on developing the characters and plot paid off in full, but the combination of gimmick riddled deaths and choreography is massively entertaining. It’s like watching two well-armed and highly skilled kung fu armies do battle in a trap layered abandoned temple and the results are ridiculously fun and impactful. There must be particular praise set up on the use of the trident weapon of the villains. What seemed like a gimmick for most of the film is utilized to its fullest in the final act including some ridiculously fun (and occasionally physics defying) stunts with them. The way that the various fighters throw them and bounce them off of other people to one another is complex enough that after I finished the film, I had to rewind and check out just how outrageously well timed some of it was. It’s that good.

Masked Avengers might not be for everyone with a rather violent approach and plot heavy first two acts, but the strength of both of these aspects pays off in the highly top notch final act. The combination of the Venom Mob and Chang Cheh fires on all cylinders here in all of the best ways. It’s not quite as serious in its narrative as one would expect with its dedication to plot and characters and it’s not quite as outrageous as the concept would seem, but Masked Avengers is a very impressive combination of the two. A true kung fu gem if I ever saw one.

Written By Matt Reifschneider
Posted by DarkReif at 1:43 PM