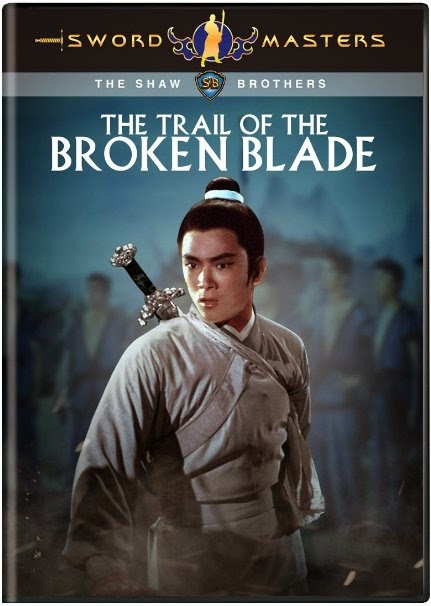 As a Shaw Brothers fan and even more particularly a Chang Cheh fan, I was stoked when The Trail of the Broken Blade was finally getting its official US release. One of the first big films for Chang Cheh at the iconic studio, it's a sort of kick start that lead him to his brilliant film The One-Armed Swordsman. Unfortunately, The Trail of the Broken Blade is not quite the epic wuxia film I was expecting. In fact, it’s quite the awkward blend of different influences and genres that ultimately lends to a less than thrilling experience.

For Li Yueh (Jimmy Wang Yu), avenging the death of his father by killing a well respected officer has lead him to a life on the run and keeping him from his childhood love Liu Xian (Chin Ping). Liu Xian refuses to let go and she sends another dashing swordsman Jun-zhao (Kiu Chong) to find him and bring him home. Not knowing, the two become sworn brothers and a group of assassins from Flying Fish Island are out to make their lives hell.

The early years of the Shaw Studio saw them unsure of how to proceed with their brand of martial arts films. So a lot of the issues that arise with The Trail of the Broken Blade are not necessarily from the actors involved or even from Chang Cheh in particular. The third act certainly seems to find its footing and feels like the Chang Cheh film I wanted from the first minute, but the first two-thirds stumble through some…different elements.

The biggest piece that makes The Trail of the Broken Blade a rather awkward film is the strange blend of classic opera style and the low-key sensibilities of the Japanese samurai film. On one end of the spectrum, this film is ridiculously over the top at times. The bright costumes, the super melodramatic music, the make-up. The eye liner on Jimmy Wang Yu rivals that of Egyptian hieroglyphics at times. It also throws in a few songs for shits and giggles, not performed by the cast mind you, but as a sort of narrative for some forced and random montages that pop up here and there. This is, of course, blended with a sort of stolen structure from the popular Japanese samurai films as a man must darkly wallow in hiding and falls prey to a slew of assassins that are hunting him down. The swordplay and action is sparse in the first two acts as it focuses on building a plot that’s far too complex (and dare I say boring) for its own good. It’s not about the complex battles or choreography that kung fu films would be known for, but instead focuses on the intensity of those moments instead. What makes it so awkward is that the combination of big cheese presentation and complex subtle narratives don’t work together.

Luckily, if there is a saving grace for this film, the third act finally gathers some steam. Chang Cheh, while still showcasing a bit of amateur issues, seems to find his style and voice here – and one that he would embrace fully just a few films down the road. It’s the third act that feels like a true Shaw Brothers film with its cheesy villains, epic weapon battles, and almost fantasy like elements as our heroes travel to Flying Fish Island to confront the Black Net Devil and his followers. Jimmy Wang Yu does his best to convert to the killer that the first two-thirds desperately wanted him not to be, but it’s the sort of weird twist to tongue-in cheek feelings that works here. Not to mention we finally get to see some of his rather fun violent moments like a man being pierced three ways by metal spikes in a trap or a massive surge of blood that pours from the hair line of a slain man.

All in all, while The Trail of the Broken Blade is an interesting look into the unsure style and feeling of early Shaw films, the resulting film is more for established fans and not for those just dabbling into the genre/studio. It’s just an awkward film that rarely gets moving due to poor cohesion and genres that don’t fit together.