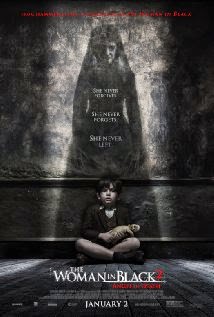 The Woman in Black was the sort of film that grew on me. My initial review after a theatrical showing was rather hum drum, but with second and third viewings I really grew to enjoy it for its deep atmosphere, great setting, and old school approach to storytelling. It’s sequel, The Woman in Black 2 – complete with the terrible subtitle Angel of Death, is a film that desperately attempts to execute all of the elements that made the original one work, but utterly falls flat in actually getting them to work. At its core it’s a perfectly serviceable haunted house/killer ghost flick with plenty of jump scares to frighten the 16-year old couple in front of me at the theater, but for horror fans it’s a film that completely stumbles out of the gate and can never recover.

Eve (Phoebe Fox) is a young schoolteacher in 1941 London. The bombs from a vicious German force rain down regularly and in an attempt to keep children safe; they are placed in a countryside house far away from cities. It also happens to be the Eel Marsh House. A house that also happens to be haunted by a terrible ghost. A ghost that happens to hate children. That happens to make them kill themselves. Oh no!

The concept for The Woman in Black 2 is actually a clever one. Having the film take place during the bombings of World War II is a great potential setting for the flick and the continued use of the Eel Marsh House should have generated that same brisk and dense atmosphere that made the first film work so well. Hell, the film even has a decent set of characters going for it with a young schoolteacher with a heavy past, a military pilot with his own issues, and even a hardnosed head teacher. Honestly, on paper, The Woman in Black 2 should have been a shoe in for a great ghost flick and one of the best of 2015 already.

Too bad it’s terrible. I’m not the one to say its one person’s fault for the utter failure of this film, as it seems like there are legitimate attempts to be as good as its potential, but every attempt there are at depth is squandered by generic formulas and awkward writing. Firstly, the film lacks any of the atmosphere of the original film. Part of this is that director Tom Harper lacks in giving the setting the density that it originally had. The house isn’t this massive foreboding presence that it should have been, the dank marsh lacks that suffocating feeling it should have had, and the inclusion of so many characters (and lots of children we have no idea about) takes away the isolation elements. This is just salt in the wound for a film that haphazardly injects enough silly jump scares that the hardened horror fan in me ended up rolling my eyes more than normal at the formulaic set ups.

Yet, I have to say that it’s the writing that might end up being the biggest missed opportunity for The Woman in Black 2. Having a ghost film about children set to the background of a war instantly invokes comparisons to the astounding The Devil’s Backbone. Despite some attempts at getting the ghost story and the war setting to set up parallel elements, The Woman in Black 2 fails to take its setting as a deeper element for the characters. Oh, we have a pilot that’s afraid of water! Great. Another missed opportunity in the writing is a nice parallel they could have developed between the motherly elements of the phantasm and the motherly back story/current job of the main schoolteacher. At the core, there could have been an amazing motherly streak story twist (and perhaps a spin on making the two character arcs start to mimic one another), but The Woman in Black 2 seems to shun almost all of that depth for following a consumable blueprint – and it’s massively disappointing.

All in all, the 16 year old couple in front of me in the theater seemed to have a great time with The Woman in Black 2 – screaming at all of the forced jump scares and even inquiring to one another at one point why Harry Potter didn’t return, but its their enthusiasm with this generic ‘date’ horror flick that makes it so damn disappointing. It’s a film that does stretch its thoughtfulness, it adheres to the standard ghost elements too religiously, and the creative execution of the original one is all but missing. Honestly, the most horrifying part of this film is watching it stumble and fail at every turn to create something memorable. Perhaps it will be like the first one and grow on me with time, but this time around I highly doubt it.