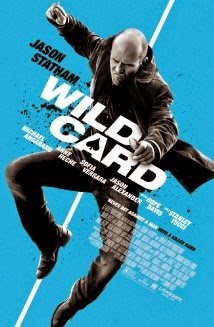 Jason Statham’s career has veered into some interesting places in the last few years. While I’m sure most folks will never seem him more than an action star who kicked off The Transporter franchise and sits as Stallone’s right hand man in The Expendables, he isn’t afraid to add touches of other genres to his résumé. I was initially a bit frightened by Wild Card for being essentially dumped onto VOD, but after seeing the film it seems perfectly clear. This is not a film that would have done all that well for him theatrically in the US. Wild Card certainly contains some legitimate action set pieces, but this film is more akin to his films like Blitz and Redemption than Crank.

Nick Wild (Statham) is a ‘security services provider’ in Las Vegas – ergo he beats down people for money. He dreams of a better life though, even if he strongly believes it’s out of reach. When a friend of his finds herself beaten and raped though, he sets off to see if he can straighten things out…the only way he knows how to do it.

Wild Card has some very big names behind it. Not only is it a Statham vehicle, but it’s helmed by director Simon West, written by Academy Award winner William Goldman (from his novel), uses fight choreography from Hong Kong legend Corey Yuen, and stars a slew of recognizable faces in some rather small bit parts. Don’t let that list of names sway you though, the film is not nearly as robust as it would seem. In fact, like the previously mentioned Blitz and Redemption, Wild Card is far more of a character thriller film for Statham than anything else.

On the flip side, it’s kind of obvious that this film wants to fall in-between the cracks of being a dramatic thriller and the fun action film most people are used to seeing from Statham. Simon West, who seems to be on a sort of resurgence of his career lately, handles it remarkably well and slow slides between character driving monologues and glass shattering fist-to-cuffs. Perhaps the biggest issue though with the film is it sort of lacks a sense of urgency or danger for Mr. Wild as he tumbles into some bad situations that seemingly only get worse. The film is almost too confident and small scale for that. When we find out a hit squad is out for him and he tells his quirky new friend that there is a good chance he will be murdered today, we don’t quite believe it. Namely because…well, this is a Statham vehicle and nothing previous has lead us to believe that he can even be hurt, let alone left for dead in a gutter.

This is mostly due to the rather awesome, if not a little brief, action set pieces present in the film. The combination of choreography Corey Yuen and Statham worked impressively well in the Transporter films and it continues to work here. He uses bar utensils, his obviously steel plated head butts, credit cards, and even a spoon at one point to repel mini-armies of touch baddies. West tends to use a little too much slow motion in these (perhaps to give it a more artsy touch or elongate the matter since he so swiftly dispatches of these muscle heads), but it is a nice break from the character beats in the film.

All in all, Wild Card is not a perfect film although it was a much more thoughtful film then I expected…which, of course, I had nightmares that it was as bad as Parker. The fights are fun and surprisingly violent, the character work is much deeper then the normal film for Statham, and in the end I was massively entertained throughout. Sure, it lacks a bit of ‘oomph’ to its plot and feels like it needed to go even bigger in the finale, but I would say most Statham fans will find plenty to enjoy in the film…even if Lionsgate knows it’s not the action film to fill seats in a wide theatrical release.