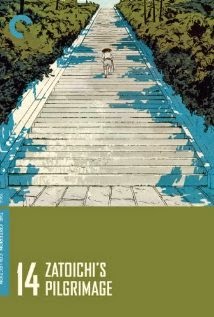 After the startling and praise worthy potency of Chess Expert and Vengeance, I almost expected the Zatoichi franchise to be hitting a second ‘golden era’ after the first four films rattled my world. Then, of course, I saw that Zatoichi’s Pilgrimage, the fourteenth film in the series, was directed by Kazuo Ikehiro. While the name might not ring a bell for most folks, he previously directed two other links in the Zatoichi chain, both of which lie towards the end of my favorites. I kept optimistic though and went into the film with lofty expectations. Only to have them semi-crushed by the rather generic film on hand here. There are a few things to enjoy and love in Zatoichi’s Pilgrimage, but after the heights reached in the twelfth and thirteenth entries it’s hard not to be pretty disappointed.

Zatoichi (Shintaro Katsu) is on a pilgrimage. While on a trip to visit 88 shrines to find forgiveness for all of the people he has killed in his travels, he just so happens to kill one more. This one was sent by a conniving landlord and horseman Tohachi (Yamagata) just to have the would-be assassin killed. Zatoichi seeks out the man’s family and finds himself, once again, a make shift hero for a village cowering in fear.

At this point, the Zatoichi series has not only established a formula, but it’s perfected it. So depending on the film, it’s the execution of the idea that’s wrapped around the formula that determines whether it’s good or not. After the last two films, Pilgrimage simply seems…lazy. The film starts off on the right foot, Zatoichi – once again played to the nines by Katsu – is on a ship heading for his pilgrimage when he meets a cocky thief. You can probably guess where it goes from there. The unique setting of the ship and the glorious Zatoichi moment here is played up to Ikehiro’s grindhouse style that he used to heavy effect in Chest of Gold. Unfortunately, this sort of fun moment quickly descends into mediocrity though.

The majority of the film is then spent sort of building the same plot and characters we have seen a few times before in this series. The lead female role is decent, but rarely as engaging as the some of the ones prior and our blind hero seems to run through the motions that is really only sold by Katsu’s continued fluidity and charm of the character. Pilgrimage is giving a fun almost spaghetti western vibe with its dusty summer village setting and the true highlight of the film comes in the form of the villain – a horse riding, arrow toting, beer belly dragging scumbag that steals damn near every scene he’s in.

While the majority of the film sort of meanders about with its generic plot, the film does pick up in the last 15 to 20 minutes for the finale. Ikehiro may utterly miss the opportunities to deepen the characters or give the plot meaning, but the man knows how to shoot an action set piece to its greatest grindhouse entertaining value. Pilgrimage really owns it at this point and plays up the arrow vs sword, hero vs villain aspect to some massively entertaining results. Even in one of the mid way sequences there is a fun moment where Zatoichi splits an arrow with a barely drawn sword that might be one of the cooler moments of the series thus far.

Zatoichi’s Pilgrimage might be entertaining in its opening and its finale where Ikehiro uses his talents as a grindhouse style director to full benefit, but the rest of the film is a sort of wash. It lacks a lot of the depth of storytelling and the flow of narrative that has made the best Zatoichi films the high quality films that they are. Pilgrimage is a fun movie in moments, but it really lacks the oomph to take it to the next level.

Written By Matt Reifschneider
Posted by DarkReif at 5:14 PM