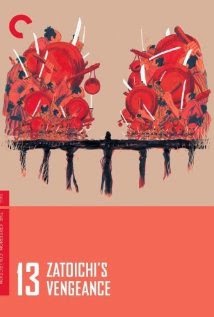 
“Taichi. When you grow up, don’t make fun of handicapped people. Although these men may look human, they’re less than animals.”

It’s as if this franchise never loses steam at this point. Like the titular blind swordsman protagonist, the series continues on its way, occasionally stumbling but always popping up at the right time to strike when needed before heading off into the sunset. For the thirteenth entry, Zatoichi’s Vengeance, we see a continuation of the executed strength from the previous film, Zatoichi and the Chess Expert. While the formula for the franchise still exists in spades (ultimately, this one is decently predictable), director Tokuzo Tanaka breathes fresh life into it once again, leading the viewer on another riveting and thoughtful adventure with the ever charming Zatoichi.

Zatoichi (Shintaro Katsu), like he always does, stumbles into a dispute on the side of the road where a dying man leaves him a bag of money to take to his son in a nearby town. In this town, he finds a group of people being bullied by a new and greedy force and he is once again forced to take up his sword against those who fight for wealth…but will the young boy who has taken him for an idol be able to understand his violent ways?

There have been a lot of different faces for the character Zatoichi throughout this franchise and while I have spoken to this facet before in previous reviews, Zatoichi’s Vengeance takes on a rather new and intriguing one: Zatoichi the Role Model. With a sort of ‘voice of reason’ provided by a blind monk that Zatoichi meets on the road to the village, his interactions throughout the film are filled with doubt and we see a character who starts to question himself a bit – a move that makes his arc a rather fresh one. It’s a theme fleshed out by a slew of unstable secondary characters – including a very smart subplot featuring a wayward samurai husband and his forlorn wife forced into prostitution – and the continued use of smart thematic writing makes this one of the better entries. Although it probably lacks a bit on the emotional essentials that saw Chess Expert rise to being one of the best, Vengeance is still remarkably effective in its narrative and character beats that really works in a lot of thoughtful pieces that analyze its lead character and his interactions.

Yet, there is one other component that kicks Vengeance to being one of the better entries of this series. It’s the luscious action set pieces. If anything, many of the more powerful entries lacked in this department and Vengeance is one of the best at balancing the two facets of the samurai film. Director Tanaka has a serious knack for great visuals and when it’s paired with stellar cinematography and the impressive choreography, the combination is explosive. An opening fight in tall reeds and the finale, which slowly becomes a silhouetted battle on a bridge, both become some of the best fight pieces of the series. Even the final bout with a sympathetic ronin is one of the best one on one fights the series has seen in many, many entries.

If the Zatoichi franchise continues to pump out outstanding swordsman films in this manner, I would be tempted to say it’s not only one of the best Japanese series, but any series of all time. Zatoichi’s Vengeance is another impressive entry that provides thoughtful writing, humane insight, and entertaining humor and action that delivers a film that rises above its status as the thirteenth entry of a serial film franchise.