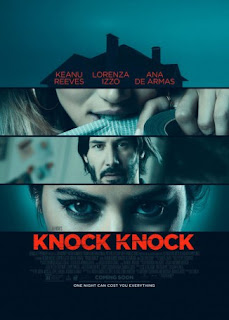 One of the things that I enjoy about Eli Roth and his films is that weird ability they have to create a divide in horror fans. Half of my horror friends love him, the other half despise him. I’m not necessarily the biggest fan of his movies overall and his writing is always shaky at best, but I appreciate his dedication to his own style. This is why I was so curious about Knock Knock. For his latest venture into the horror foray, Roth ditches his gore fever for a more classic femme fatale home invasion flick. While I appreciate his leap into a new sub-genre of horror, Knock Knock is a rather mixed bag overall. One that will most certainly be divisive among the horror community.

Evan (Reeves) is a good man, a good husband, and a loving father to his two kids. When his family heads out of town to the beach, he’s stuck at home working diligently on his architectural work. During a rainy night though, two mysterious young women arrive on his doorstep. Being the good man that he is, he invites them in out of the rain and tries to help them with their problems. Unfortunately, they seem to have different ideas about what he can help them with.

There is an obvious blend of Fatal Attraction and Funny Games on display with Knock Knock that most horror fans will latch onto immediately. Conceptionally, Roth once again harkens back a few decades for inspiration for the film and in many ways he modernizes it to work in a new age of digital media, social networking, and information flow. Unfortunately, while the intriguing bends of how to create that ‘horror is isolation’ aspect doesn’t always work for the narrative and often it blooms into some massive plot holes that leaves the audience having to push aside their own sense of disbelief to continue with the film. Partnered with Eli Roth’s own ability to make things seem over-the-top, Knock Knock struggles a bit to execute what it wants exactly.

A lot of the issues that arise in this throw back, tense sexual thriller come from it existing in two different realms. The first realm is what Knock Knock wants to be – a tense, frustrating man-in-a-maze film. The plot remains purposefully vague in many ways, including the exact whys and whos for the femme fatale villains of the flick, as not to detract from the in the moment suspense. Roth does his best to blend his own outrageous style (and humor) into a film that doesn’t necessarily fit his strengths. It’s admirable in many ways to see how much Knock Knock pulls away from going too far with its horror and really attempts to build atmosphere. It definitely goes all the way with the sex and the sexual aspect, but that seemed par for the course if you have seen any of his previous films.

The other realm that Knock Knock exists in was just briefly alluded to – the Eli Roth film we know and expect. His patented brash and dark humor bubbles up in spades, including a final moment featuring Facebook, and the film tends to really dig down and start using the grindhouse exploitative elements to reach the places it wants to go. The tension is built with obvious broad stroke plot devices (including sex, nudity, and dialogue) and unlike the films that Knock Knock strives to be, it struggles with subtlety to get there. It certainly doesn’t help that Keanu Reeves has a pretty limited range of acting and by the finale he’s pushing his own boundaries in very unbelievable manners. In a way, this film is far more entertaining than it is ‘good’ and I would suspect that is just how the director wanted it.
As silly as it may seem, Knock Knock is just kind of an awkward movie. It’s obvious that Roth wants to add more ridiculousness to the proceedings, but feels inclined to pull back and try and devote more time to tension and atmosphere – which are not necessarily his strong points as a writer or director. The humor is fairly spot on and the ridiculousness of the plot is fun in a grindhouse gimmick technique, but Knock Knock almost feels too reserved for its own good and it feels like a director who purposefully chained himself to try something new. I will say this: I was massively entertained by the film and, quite frankly, that's the biggest win this film could achieve here.

BLOODY PRAISE: During my film festival screening, a dozen people walked out of the movie. I would say twice as many as that gave it a standing ovation at the end. So yes, the film is a bit dividing in how it goes about things.

Written By Matt Reifschneider
Posted by DarkReif at 8:14 PM