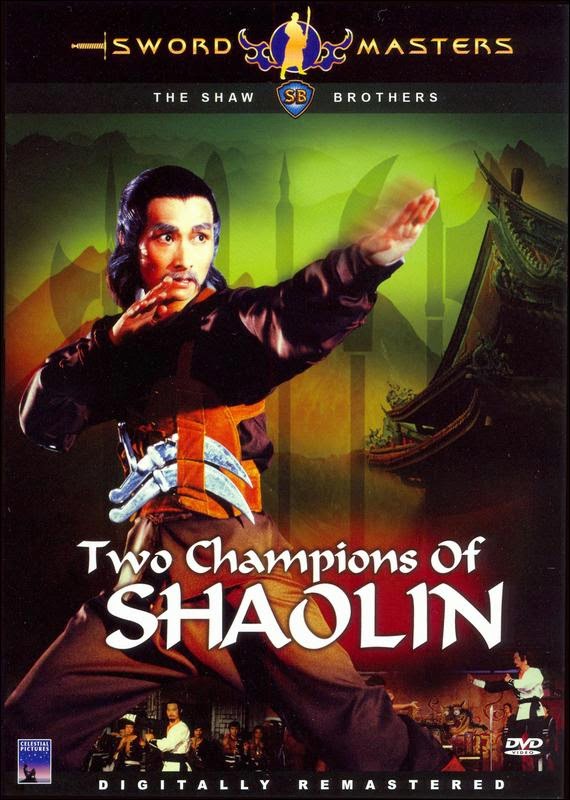 “Your dagger-throwing wife is dead. Tong Qianjin, you can join her in hell.”

It’s not a huge secret that Shaw Brothers films were built on very basic formulas and repeated elements that worked in their favor. Sometimes to a fault. This is where Two Champions of Shaolin tends to stumble. Even with the talented cast it has and under the watchful direction of Chang Cheh, this Shaolin vs. Wu Tang tale tends to be a little too predictable and a little too safe with a lot of its choices. Without the gimmicks that made a lot of later Chang Cheh flicks so much fun, Two Champions of Shaolin sort of exists as just another kung fu flick albeit with plenty of fun fights.

For Tong Qianjin (Lo Mang,) life is about to get a bit more difficult. The Shaolin school has taught him to fight for the cause and sends him out in the world to uphold the beliefs of his school. He teams up with a fellow Shaolin student (Chiang Sheng) and a brother and sister duo to form a sort of group to battle the villainous Wu Tang clan. When the Wu Tang clan kills his wife on their wedding day though, the war that is igniting may not leave anyone alive.

There is an interesting subtext to Two Champions of Shaolin. Here we have an entire generation that are sent to battle to the death against an opposing force by an older generation and told to just follow orders instead of thinking for themselves. Only one young man (a key player in the plot twists in the third act) starts to think on his own. Unfortunately, this is all subtext and it’s rarely utilized to its maximum – and thoughtful – benefit in the film. In fact, Two Champions seems deliberate to only use it as a plot device to quickly brushes over it for the sake of keeping to the formula, which in the end is a real shame.

From there, Two Champions tends to play it by the book. The first act is generously cheesy with its set up as it speeds through to get us to main story (which is after the wedding party beat down) and then the film…drags. The second act, which is the biggest portion of the film and takes a twist towards an almost espionage tact, seemingly drags the ground by introducing a slew of new characters and focusing on a sort of chess match between the two clans as they plot against one another. While there is enough to keep the audience intrigued, the speed of the opening act certainly set up expectations that Two Champions cannot keep and it really does end up feeling like it’s moving at a glacial pace.

Luckily, this is a Chang Cheh film so the final act almost redeems the rest. The set up takes fucking forever, but the final battle is mostly worth the time spent getting there. It helps that the film picks up to a pace similar to the opening act and starts moving at a lightning speed. The fight sequence is decently epic with multiple battles all happening at once and, in true Chang Cheh fashion, features some shockingly violent moments for a kung fu film. In fact, the final death sequence had my mouth agape for a second. Ah yes, gotta love Chang Cheh even at his most mediocre.

It’s just too bad that Two Champions of Shaolin tends to be so mediocre overall. The first act moves too fast to set up a second act that moves too slowly. It’s a bit too safe in how it presents its rather intriguing premise and even though the final fight sequence and a previous wedding day brawl are great action set pieces, the resulting mix is just…disappointing. Particularly for a Venom Mob film by Chang Cheh.