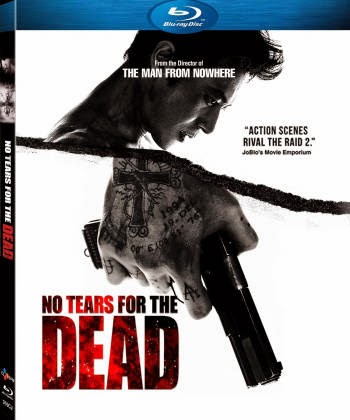 I think at this point it is safe to say that director Lee Jeong-beom is the next John Woo. His last film, The Man from Nowhere, brought me down like a man slit at the ankle tendons with a knife. It was a spectacular action flick to say the least. His follow up, No Tears for the Dead, is of a similar vein and in similar caliber – pun fully intended. It’s not quite as good as the previously mentioned film, but that doesn’t mean that it’s not a hellaciously awesome action flick.

Gon (Jang Dong-gun) works as a hitman for a family in the US, but when his most recent hit goes awry and he ends up killing a little girl his cohorts send him off to Seoul to find the mother and get rid of her too. Upon arrival though, he finds himself too guilt stricken to be unable to finish the job. This, like always, makes it tough as various other killers are sent to finish it…and him.

The John Woo reference in the opening is there for a reason. Namely because No Tears for the Dead fits right in with the heroic bloodshed and ‘killer with a conscious’ plot he loved to use with his mainstay actor Chow Yun Fat. Thusly, if you love films like The Killer or even the John Woo-esque The Replacement Killers then this is a must see, must have, must watch on repeat kind of film for you. The intent is most certainly there to be associated with those kinds of films.

Outside of the plot that we have seen before in a hundred other action movies, No Tears for the Dead is a proficient study in how to take deep character work and balance it with ferocious action set pieces. The film moves with an interesting structure as it is almost cut into two parts. The first part is all about the character and plot build. Seriously, outside of the opening hit and one (might I add extraordinarily badass) car wreck the first hour is dedicated to crafting the foundational plot of the film. Jang Dong-gun and Kim Min-hee both possess a strong ability to craft subtle acting with the rather broad stroke plot progressions of the script and director Lee has a real knack for keeping the visuals and color palettes varied and effective to make sure that the audience never loses focus. They know it’s going to be an hour before we start to pick up the energy so they do everything in their power to make it worth it.

The second hour is damn near wholly dedicated to unrelentless ass kicking. This is the truthful highlight of this film and boy, oh boy, is it a highlight. Gun battles, hand to hand combat, a brief knife fight, a few explosions, and the ever awesome Brian Tee as our counter villain for Jang Dong-gun to face off against. The violence is extreme in a lot of the moments – there is a knee to the head of a gentleman that might be one of the most brutal things you see this year – and there is plenty of gore to spurt out with it. It works both from an action junkie standpoint and from the cinephile standpoint that is thanks to the generous character beats in the first half and a few key moments to bring our heroes and villains full circle.

If you saw and loved The Man from Nowhere or simply love the heroic bloodshed films from John Woo, then No Tears for the Dead comes with only the highest recommendations. It’s not quite as proficient at the same aspects of Lee Jeong-beom’s last film, but it’s still a massively entertaining and well-built action machine featuring some stellar performances and badass anti-heroics. No Tears for the Dead comes with a massive Blood Brothers splatter of approval.