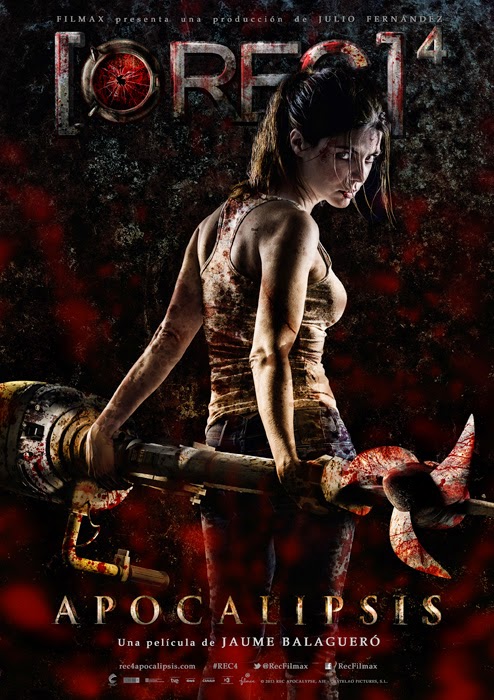 It might be true that the [Rec] franchise has increasingly lost steam with each entry, but it’s hard not to love the first two films and appreciate what the third one was attempting to do to change up the dynamics of the series. My lukewarm take on the third film didn’t stop me from being stoked for the fourth entry Apocalypse and the return of director Jaume Balaguero had me intrigued for what he had in store for the epic finale. As it turns out, [Rec]4 mostly had disappointment in store for me with its back to basics approach and relatively safe turn for its story. It’s still a decent zombie flick for those looking for it and it comes off as exciting overall – but for this franchise I still expect a bit more than that.

The two lone survivors (Paco Manzanedo, Crispulo Cabezas) of a military team that went in to rescue TV reporter Angela (Manuela Velasco) at the ill fated apartment complex in Barcelona are stuck on a massive ship out at sea. A group of scientists and their armed guards need total isolation to concoct a cure for the monstrous virus. Angela is there as is one of the few survivors of the wedding outbreak earlier and together they will have to team up to survive one final outbreak and find a way off of the ship when shit hits the fan.

[Rec]4: Apocalypse is the kind of film that is going to tear fans in two directions. On one hand it adds a few elements that the series was known for as a continuation of the franchise and it moves at a lightning pace, but on the other hand it deviates even further from what made the first two films worth it. As a long time fan, I enjoyed seeing the return of Angela to the fold, particularly after her unknown fate we were witness to in [Rec]2. The appearance of a character from [Rec]3 is a bit shocking and useless though. It’s almost as if she was shoehorned in to just make sure we all didn’t forget that the third entry existed as it comes off as irrelevant for the rest of the film. Apocalypse also has the pacing going for it as it moves at a ridiculously fast pace. Partnered with the claustrophobic and unique setting of a ship at sea, [Rec]4 does succeed as being a rather energetic and fast paced zombie flick complete with plenty of monstrous attacks and a rainy chaotic finale.

Unfortunately, just being a fun and energetic zombie film doesn’t quite cut it for a series known for innovation in the genre. This latest entry (which at this point I sincerely doubt will be the last) does move in full to being a traditionally filmed picture. This, like the last half of the last entry, does seem like a huge cop out of the stylistic choice that this franchise made a legit form of horror entertainment. Director Jaume Balaguero tries to recapture some of the in-the-moment terror by keeping the film frantic with tons of shaky cam, but the magic is sort of lost in this move…not to mention irritating as far as getting an audience sea sick sitting on their own couch. [Rec]4 actually makes its biggest mistake though in pulling away from the quirky religious elements of the last two entries and biting down on being a straight up zombie picture. Blah blah blah doctors, virus, anti-virus, and the origin of the virus all make their appearances and yet not a single piece of the cool religious twists are to be found. It’s a strange shift away from originality that ends up biting the film in the ass.

As a zombie flick, [Rec]4 earns its thrills and kills with its high energy pacing and plenty of fun violence to be had (including the use of a outboard motor as a weapon) and it works in regards to being a decent action oriented horror flick. However, its movement away from originality, style, and the religious elements makes it a pretty disappointing sequel. Some fans will love it. Others will probably hate it.