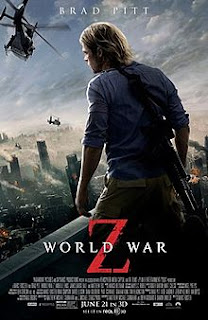 With all of the production issues that faced "World War Z," it would be a lie to tell you that my expectations were not much higher than dread for this film. Despite Brad Pitt's strong screen presence, the film's action focus with Marc Forster at the helm had me quaking harder than the cameras he used to destroy "Quantum Of Solace." Much to my surprise, "World War Z" comes out as a rather pleasant surprise as an entertaining summer film. Yes it very much has some issues when it comes to its jumpy script and Foresters relentless camera tactics, but it does redeem itself in the final act.

Gerry (Pitt) and his family are simply going about their regular daily routine when the streets of Philadelphia erupt into chaos from a quickly spreading zombie plague. On the run, they get help from the US government and military who want Gerry to use his investigation talents to help discover where the virus was discovered and find a why to battle it.

While my expectations going into the film were quite low, there was a little piece of me hell bent on hoping this film would pull it off. I wouldn't say that the film pulled it off entirely, we will get into its flaws here in a second, but it certainly was able to do a few things that impressed. When a film goes through as much production troubles and issues as "World War Z" though, I'll take whatever I can get and despite a third act that shifts completely in tone and energy (obviously due to the new writers brought on board) the film somehow comes off as still a cohesive film that overcomes its plot holes.

Now it must be said that "World War Z" only feels like a zombie film in the first 15 minutes and the last act. There are handedly the film's highlights. After brief, but quite effective, family building experience with Pitt and Enos as a couple working through life, the film kicks straight into the apocalypse with some of the fastest zombies you've ever seen on screen. It adds quite a bit of tension as they wait for their extraction and it's damn effective as a modern zombie movie when it slows down and shows the chaos of the city around them. Unfortunately, most of the actual zombie attacks are chopped and blurred to basic unwatchable status by Forster's inept ability to to craft an action sequence. And even more unfortunate from that point until the third act, "World War Z" becomes a straight up action/detective film. Pitt, doing his best to burden a rather by the numbers sort of story, is victim to extensive action sequences that are Bourne'd to death in flashes of zombie teeth, Brad Pitt's hair, and gunfire.

At this point I was ready to give up on the film. When Jerusalem fell so did my expectations. When the airplane crashed and there were only two survivors - our two heroes at this point - my hopes crashed. Then something magical happened. The film changed tone for its final act as Pitt's character actually does something sans run around. At this point, the film shifts into a horror mode. The zombie carnage is traded in for zombie terror and it works. In fact, this is the style they probably should have stuck to for a majority of the film. In a way though, it's enough to salvage a lot of the elements of it's first two-thirds and made the film, in it's entirety, feel a little less below par.

Overall the film might be a bit run-of-the-mill in its plot and it might have focused far too much on the action portion of its concept rather than the horror, but it does seemingly make a tense and entertaining picture. It's final act is quite impressive though and it makes up for a lot of the issues that I had earlier. Had only they focused on creating that tension and more horror focused style of film right away then perhaps this might have been one of the best zombie movies in the last few years. As is, it's mostly a rental even if it's entertaining and succeeds in moments.