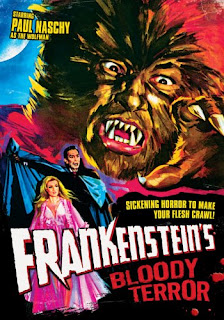 Franchises are pretty fucked up in this day in age with sequels, prequels, sidequels, spin-offs, reboots, sequels to original franchises after reboots and simply ignoring unwanted sequels. Franchises have become so convoluted that I actually feel sorry for younger generations trying to figure this shit out. All these complex franchises, whether it be “Ringu”, “Godzilla”, “Texas Chainsaw Massacre”, “X-Men”, “Highlander” or “Universal Soldier” don’t hold a candle to Paul Naschy’s Spanish horror werewolf franchise. This is seriously the most disjointed, confusing all around fucked up film series ever to be made ranging from theatrical Spanish films to direct-to-video American shit to films never translated to English to even sequels that were never released. What seems like thousands of alternate titles doesn’t help the matter. For a grand total of twelve films, Naschy’s iconic Waldemar Daninsky character with a hairy problem begins here in the confusingly titled “Frankenstein’s Bloody Terror”.
Naschy plays the ancestor of guy with a werewolf problem that has recently moved into his relatives creepy castle. Two gypsies take shelter in the castle and unwittingly release Naschy’s hairy relative from his tomb. While running around the country to stop the monster from murdering helpless victims, Nashy gets bite in the process of killing the beast bringing the mark of the werewolf down upon himself. Desperate for a cure he contacts a an individual from Transylvania mentioned in his ancestors notes and surprise, he’s a fucking vampire that is hell bent on using a werewolf to due his evil bidding.
Naschy, a short bodybuilding Spaniard, was always a huge horror fan (especially of the classic Universal horror films) and wanted a career change thus this film kicked in his long, prolific career as a horror legend, earning him the nick name ‘the Lon Chaney of Spain’. It’s easy to see his Universal horror influence with classic monsters such as the wolfman and vampires but he brings a Spanish twist to the genre. Nashy here is much more graphic and mean-spirited than his Universal, or even Hammer horror counterparts when it comes to gore and violence. Missing from this film however is Naschy trademark sleaze that would be laid on full bore later on in his career so fans of his later work might be a little disappointed by this first effort by the master.
“Frankenstein’s Bloody Terror” is a solid first horror film for the Spanish legend. It’s got the typical flaws of most of the horror films from Spain at the time (mostly due to questionable scripts) but the nifty inclusion of vampires into the werewolf film and the graphic violence makes this an interesting view for fans of the Euro horror genre. The title however throws many for a loop as it should because there literally is no Frankenstein monster in the film. Released as “The Mark of the Wolf Man” in it’s native Spain, the film got oddly retitled for American release to full-fill a contractual obligation. The producers had promised distributors a “Frankenstein” picture but the film they had purchased the rights too called “Dracula vs. Frankenstein” had not yet been completed so securing rights to a foreign horror picture, changing the title and adding on a laughable introduction seemed like an easy fix. Don’t let the title fool you as this is the first entry into Paul Naschy’s long running Hombre Lobo werewolf series and sequels go as follows: "The Night of the Wolf Man" (Never Released), "Assignment Terror", "The Fury of the Werewolf", "Werewolf Shadow", "Dr. Jekyll vs. the Werewolf", "Curse of the Devil", "Night of the Howling Beast", "Night of the Werewolf", "The Beast and the Magic Sword", "Licantropo: The Full Moon Killer" and "Tomb of the Werewolf".