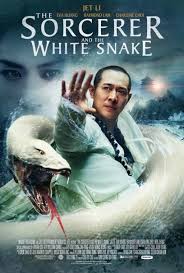 Jet Li's career in the last few years has taken an odd turn. He has steadily moved away from fight heavy films into drama like  "Ocean Heaven" or into epic influenced fantasy type film like "The Flying Swords Of Dragon Gate." With the disappointment I felt in the latter film, I hoped the the mythical edged "The Sorcerer And The White Snake" would make up for a bit of lost time when it comes to awesome modern martial arts. I was mistaken. In fact, "Sorcerer And The White Snake" is down right a terrible movie. It fails to be anything it strives for as a film and only succeeds in minute instances which are quickly washed away in a tide of mediocre CGI and poorly constructed subplots.

When a young herb collector Xu Xian (Raymond Lam) is saved from drowning by a mischievous White Snake Demon (Eva Huang) through a kiss to give him air, a love connection is made. Upon returning to her friend Green Snake Demon (Charlene Choi), she decides with her help she is going to try to take a human form and start an Earthly life with young man. The problems remains that Abbott Fahai (Jet Li) and his disciple Neng Ren (Wen Zhang) are professional demon hunters armed with other worldly powers that punish demons for interfering with human existence. The two sides are on a collision course that will rock the foundations of the world...can love truly conquer all?

Initially, the promises held by "Sorcerer And The White Snake" seem pretty awesome. Jet Li, as a villain of sorts, duking it out with demons who don't want to harm anyone? Fuck yeah. I'd buy that for a dollar. The problem is, which is a massive issue that undermines the entire film, that this flick has no idea what it wants to be. Is it a martial arts film? Is a romance? Is it a comedy? Is it an action fantasy? "Sorcerer And The White Snake" then tries to ball of these nuances and styles into one massive flick - which in turn does not create a layered artistic endeavor, but one massive clusterfuck. It tries to fit so much plot and character work into the film that none of it comes off as impactful as the premise promises. The martial arts are too fantasy driven, the romance is underdeveloped and forced, the fantasy elements awkward, and the comedy sporadic and randomly thrown in. Half of the time, it just randomly jumps from a comedic sequence to a romantic one (each it's own subplot as the Abbott's disciple turns into a vampire and the snake demon charms her love interest) and it chops its way through instead of letting the story flow. It's frustrating through and through.

To make matter even worse is that in the last act, the film takes a massive turn for the ridiculous and becomes a massive fight sequence between Jet Li and Eva Huang. Why is this worse, you ask? Because it's just two people standing in front of a green screen thrusting fists at each other while insurmountable amounts of mediocre CGI (in the form of water columns or cloud fists) pummel the viewer. Is it epic? Sure. Does it bore? Absolutely. Who cares about wind and water fights? Particularly when all it is is random fantasy injected CGI that rarely, if ever, looks real. The film was already failing to impress outside of a few action sequences (the ally fight was kinda cool) and it needed a finale that would blow me away. FAIL. All we get are CGI water/wind blasts, flying CGI people, swimming CGI rats, oh and Jet Li suddenly has the ability to lift an entire building off the ground. Seriously?

Now I guess "The Sorcerer And The White Snake" isn't all bad. But damn it's hard to see any of the good aspects through all of the crap that's thrust at the audience. For fans of Jet Li this might be a quirky film for your collection and maybe for those who love a fantasy film, but for this martial arts fan there is too much irritating storytelling flaws with poor focuses. That, and China's weird new obsession with CGI for their "blockbusters" is getting old. It essentially takes a film that had potential like "Sorcerer And The White Snake" and makes it almost all trash. I suggest a skip.