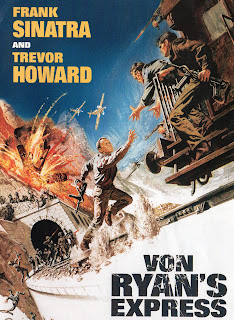 Having a history degree it should come to no surprise that I have affinity for World War II films, especially a liking for films in the genre made in the 1960s. For years I had heard about the greatness of “Von Ryan’s Express” but kept putting it off for the simple fact it starred Frank Sinatra. Ol’ blue eyes has a great voice and isn’t even a bad actor but I was never a fan of him as a person as his arrogant Jersey smugness always rubbed me the wrong way. Well after finally getting past my Sinatra ‘hatred’ I finally broke down and got this WWII classic and I’m glad I finally did as it lived up to it’s reputation of being one of the all-time great films of the genre.
Sinatra plays a pilot who gets shot down in Nazi occupied Italy. Thrown into a prisoner of war camp he butts heads with a British commander (Trevor Howard). After negotiating with their Italian captor (Adolfo Celi of ‘Thunderball”) he gets the prisoners rations and clothing but gets thrown in the sweat box in exchange. While cooking alive in the tin can the prisoners take the camp and escape not long before being caught. While being transported on a train, ol’ blue eyes and crew take it over and it’s a freight train speeding to freedom… but only if they can outrun the Nazi’s that seem to be at their every turn.
Before the 60s most war films were about being ‘heroic’ but when the 60s came calling war films turned a little darker, showing the horrors of war and became character studies on how war negatively affected individuals. This is why I love this era of the genre. “Von Ryan’s Express” takes this darker angle yet at the same time is a rip-roaring adventure flick along the lines of Alistair Maclean novels. It starts off like prisoner of war film, mimicking “The Great Escape’ but then quickly morphs into a high adventure escape flick that is sure to keep audiences on the edge of their seats at every turn on the track.

The look of the film is grand as Fox has something to prove after their huge flop “Cleopatra”. Mamoth sets (including a prison camp), eye popping cinematography, amazing special effects and authentic props was all a show for Fox to prove to their competitors that they were still worthy competition in the business. It worked as the film was a hit and historians will marvel at the authentic set pieces, including trains and clothing. Jerry Goldsmiths marvelous score perfectly encompasses all these professional film products.

The cast is great (with James Brolin in a small role) and though I’m not a fan of Frank Sinatra as a person I do admit he a wonderful acting job. One can tell they changed much of the dialogue to the wise, shiftless attitude of Sinatra but it fits him well especially with his adversarial relationship with Trevor Howard, one of the most underappreciated actors of his time for playing second fiddle to main leading men. Sinatra’s character is flawed, making poor dicisions throughout the film that affects the lives of the other prisoners so he personally had the ending of the film changed, and in my opinion for the better as it is more fitting for the character.

“Von Ryan’s Express” is an exciting, high class thrilling World War II film. The darker approach to the subject matter with the high adventure script makes it an absolute winner and it’s a damn shame I waited so long to see it. I would even go as far to say that “Von Ryan’s Express” ranks up there with the best of the genre, just under the likes of films classics such as “The Great Escape” and “Where Eagles Dare.” In other words it’s a must own.

Posted by Cronosmantas at 9:16 AM