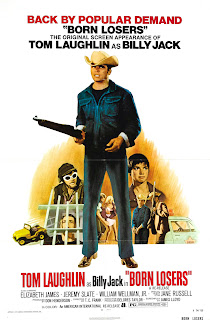 Billy Jack mania swept the nation in the early 70s with the 1973 release of “Billy Jack”. Few then and even today other than the most die hard fans realized that it was a sequel to a modest 1967 dive-in hit “The Born Losers”, a vigilante film jumping in on the biker movie craze at the time that more importantly introduced audiences to an ex-Green Beret ass-kickin Native American “half-breed” played by Tom Laughlin. Yes the legend of Billy Jack begins here.
A biker gang makes their way into a Southern California coastal town to tear the place up. Billy Jack, in attempting to save a young man’s life, gets arrested and punished more harshly than the gang members that attempted the murder. In the meantime the gang kidnaps and rapes four young girls in the community and threaten their lives if they testify in court. Billy Jack, upset with the legal system, begins to fall in the love with one of the victims and decides to take the law into his own hands.
“The Born Losers” is a labor of love for Tom Laughlin as he wrote, directed and starred in the film for the sole reason to raise money for his dream project which would later evolve into the film “Billy Jack”. “Billy Jack” contained too many controversial themes to be made at the time so Laughlin toned down the message a bit but that doesn’t mean “The Born Losers" lacks any hidden meanings. On the surface it may look like “good guy defeats biker gang to save rape victims” but hidden below its ‘biker film’ exterior is how the Vietnam War affected everyday normal Americans. He is also careful to make all the characters not completely ‘good’ or ‘evil’ and that both sides exist in all of us.
The production values are extremely low, definitely drive-in-fare and the film runs far too long (typical with Tom Laughlin “Billy Jack” films) clocking in a hair under two hours long when a film of this nature should have kept between the 80 to 90 minute mark. The bikers spend most of the time talking but the few confrontational action scenes are good and Tom Laughlin (sporting a cowboy hat instead of his iconic ‘Uncle Joe’ hat) owns the role of Billy Jack.
It may be the humble beginnings for an iconic 70s character and the main message of the film may be tamer than its sequels to come, but that’s what I like about “The Born Losers”. It aims more to entertain as a film instead of being overly preachy with its core beliefs. A tighter pace would have helped the film ememesly but the likeable character of Billy Jack makes this small trifle easier to stomach (not so much in the later films) and it’s easy to see why the chacter became such an icon. Oh and there’s a sexy chick that rides a motorcycle in a white bikini… that’s always a plus.

Written By Eric Reifschneider
Posted by Cronosmantas at 5:43 PM