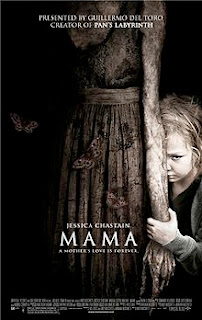 Don't get me wrong, I love Guillermo Del Toro, but having his name attached to something as a producer doesn't necessarily make great films. So when "Mama" arrived in theaters, I actually felt inclined to skip out on the film considering some mixed reviews and plenty of my horror friends claiming it to be 'not scary at all.' When I did eventually get around to watching it, my expectations were low. Perhaps it was these low expectations that made me enjoy the film for the most part, despite some glaring issues with its script and progressions, but for a modern 'ghost film' it did was it needed to throw in a few jump scares and a solid enough concept. I do think they could have pushed it further though.

When two girls are found abandoned, left for dead, in a deserted cabin in the woody wilderness for five years, their uncle Luke (Coster-Waldau) and his rocker girlfriend (Chastain) decide its their responsibility to help them. What they don't realize is that the reason these two girls, now 8 and 6 respectively, only survived with the help of an entity they call 'Mama.' A ghostly figure who's malicious intent for the loss of her 'children' may cause some problems for Luke and Annabel. Problems that may cost a few lives in the process.

What's most intriguing about "Mama" is that, like many films touched by the graceful hand of Del Toro, this one has a pretty heavy fantasy streak in it. Not to the extent of say, "Pan's Labyrinth," but there is a definite fairy tale vibe to the film. Helll, "Mama" even starts off with 'once upon a time' in the beginning and the concept that the film begins with two young sisters stranded in the woods and raised by a ghost simply smacks of something the brothers Grimm might have concocted. Perhaps the film is based loosely based on some fairy tale, of that I am not sure, but I felt that right away "Mama" tries to make that clear so judging it fully on a 'horror' scales seems a bit unfair.

From there, the film does start off with a bang. Director Andy Muschietti, with an obviously guided hand by Del Toro, is a visually striking guy and the opening sequence that features a mediocre CGI car wreck is heightened by this strong visual presence of a wintery abandoned cabin that introduces us, in a very awesome horror way, to the character Mama. After this first 15 minutes though, the film does tend to fall into the rather 'been there, done that' formula that tends to plague the ghost film. We are introduced to our two by-the-numbers protagonists, ably acted by Chastain and Coster-Waldau who are thrust into a world of responsibility by taking custody of his two nieces who are found in the woods. From here, the film hits all the right marks in many of the most predictable ways. Research about the ghost's past. Discovery of an unfulfilled story. Incidents in the house that increasingly get violent and scarier. To the film's benefit, it has enough strong visuals and a few jump scares to carry the film through in the first two-thirds.

Unfortunately, it's during the third act that the film tends to fall apart. Firstly, "Mama" starts to cave into to modern tendencies. Instead of using the atmosphere and tension so carefully crafted in the first portion, the film then decides to focus on modern jump scares padded with far too much CGI and a endless need to "show the audience too much." The film also decides to negate logic in many moments for the sake of creating more scares. Our psychologist makes a random trip to the cabin at night, a woman gets possessed by Mama...or something, and we are lead to finale that doesn't make a whole lot of sense considering the direction of focus of how the plot was moving. It was relatively frustrating to watch a decent horror film succumb to modern tendencies and fall apart in front of my eyes.

This is just how modern horror is headed. They are poisoned by a need to show too much while ignoring the life long lesson of 'less is more', catering to a CGI catered audience, and throwing in needless amounts of scares that end up negating the atmosphere. This is the exact issues that "Mama" falls prey to just in its third act. It's a sad state considering how strong the film starts off with its strong visuals, scary concept, and killer fantasy streaks. The film just so happens to trip at the finish line to end up being a bit too generic for its own good. While I do suggest the film for ghost film fans and those how enjoy Del Toro inspired work, "Mama" might be a better rental first.