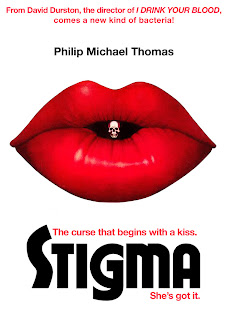 Much like his later “Miami Vice” co-star Don Johnson had a cult favorite from the early 70s with “A Boy and His Dog”, so did Philip Michael Thomas with “Stigma”, just to a lesser extent. This little exploitation follow-up to director David E. Durston’s far more popular “I Drink Your Blood” is a film with a message – safe sex. An exploitation film preaching about the horrors of promiscuous sex… what the hell is this? Oh don’t worry as it gets its message across while at the same time delivering some goods that exploitation film fans come to expect.
Dr. Crosse (Philip Michael Thomas) is recently released from prison for doing an illegal abortion and is hitch-hiking to a small island community to help an old professor with a disease outbreak. Upon arrival he finds his old colleague dead and an unwelcome response from the residents. It seems a deadly STD has broken out on the island and is running rampant due to promiscuous youths and the towns sheriff will seemingly do anything to keep a lid on it to keep the reputation of the church going community.
Mimicking “I Drink Your Blood”, “Stigma” is about disease spreading in a local community but it’s much more subtle and ‘less-in-your-face’ with its approach and gore. Due to this some fans may be disappointed from the lack of gore and horror elements but it doesn’t mean it’s any less interesting or thought provoking. The idea of mixing a message about ‘safe sex’ and ‘exploitation’ film may bring ideas of mixing oil and water but director David E. Durston gets his message across and while dishing out large amounts of exploitation goodness in the process.
The cast is likeable but the acting is somewhat restrained with Philip Michael Thomas being the best of the cast but even he comes out looking a little embarrassed at times. This could be because Thomas doesn’t know how director David E. Durston wants to take the film. At first he approaches the film as a comedy yet this is quickly dropped and then becomes an anti-racist asseveration. After that it delves into the suspense/thriller sector that preaches some public service facts on safe sex.
Some might view an exploitation film showing the horrors of promiscuous sex as hypocritical but Durston somehow makes it work and oddly enough the United States Navy at one time used the film to show their horny sailors as a scare tactic when they entered port. His direction is abashed in his approach as he doesn’t know how to present the subject matter but overall it’s an oddly compelling idiosyncrasy from the early 70s exploitation film craze with enough bizarreness, odd camera angles, kooky characters and nudity to appease fans of the weird and obscure.

﻿Written By Eric Reifschneider
Posted by Cronosmantas at 5:07 PM