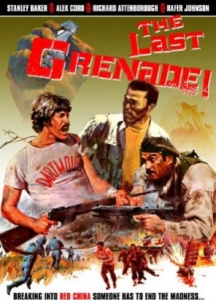 Warner Brothers’ international hit “Dark of the Sun” introduced audiences to a whole new type of action picture – the mercenary film. It was a nice transitionary after the World War II epics of the 60s and the mercenary film offered audiences a wide array of loveable antiheroes that continues on to this day with the release of Sylvester Stallone’s “The Expendables”. Due to the success of “Dark of the Sun” mercenary films begin to fill theaters and drive-ins alike. Some, like “The Wild Geese” were celebrated, others like “The Last Grenade”, were critically panned and faded into oblivion.
The film opens with the slaughter of an entire camp of mercenaries by the psychotic Alex Cord laughing historically as he mows down men from the mounted gun in his helicopter. This of course pisses off their commander who is eager to get revenge on Cord so he takes a job of entering into China to rid the government the annoyance of Cord and his new group of mercenaries from fucking their system up. Along the way he falls for his hired boss’ wife (Honor Blackman of “Goldfinger”) which causes him all sorts of trouble.
The cast is wonderful (except for Alex Cord) with respectable actors Stanley Baker (“Zulu”), Richard Attenborough (“The Great Escape) and Honor Blackman giving the film their all. Other than the lamentable Alex Cord (who gives an embarrassing performance and should no means ever be casted as a protagonist), the great cast can’t save the messy script that likes to jump all over the place. To top it off our ‘hero’ is an incompetent buffoon constantly getting spanked and humiliated by his arch nemesis Alex Cord. What can you expect from a jackass that wears a fucking red beret into battle which is equivalent of painting a god damn bull’s-eye in the middle of your forehead.
Though the film contains plenty of action, fans of the genre might be a little disappointed that the film concentrates just as much on its love story angle as the action scenes. I didn’t mind this much as it offered something a little different than the average mercenary picture and god only knows a film like “The Last Grenade” needs more beauty in the form of Honor Blakeman to help drown out the plot holes. The problem is the love angle isn’t balanced with the action scenes and tends to bog the film down, interrupting the pacing.
With a tighter script and better characters “The Last Grenade” could have been a classic example of the genre as the cast was there, just not the execution. The film has action but it gets bogged down by its love story subplot and it never truly lives up to its explosive introduction. A nice plot twist gets glazed over by poor pace and plot holes big enough to throw a grenade through. It may not be a classic but’s worth a view for fans of obscure cinema with great casts that has fallen off the radar in recent years.

Written By Eric Reifschneider
Posted by Cronosmantas at 11:57 AM