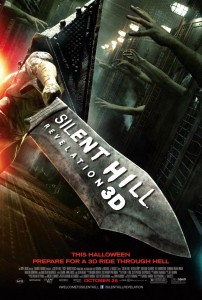 Sharon (Clemens), who now goes by the name Heather because her and her father (Bean) are on the run, has been having nightmares about a horrific carnival filled with infernal faceless creatures. As it would happen, the people of the cursed Silent Hill have been searching for her. Waiting to bring her back. They kidnap her father to bring her to the ash covered place, but what could they want with her?

To give my review some context, I have to say that even the first "Silent Hill" isn't a great film. It was a bit long and the story could be a bit confusing. It did, however, have stunning atmosphere and the visual charm of director Christophe Gans. When he dropped off of this sequel and Michael J. Bassett stepped on, I already knew that "Revelation" was in trouble. Trouble isn't a harsh enough term for it. "Revelation" is single handedly worse in every aspect to the original - and that's from a guy who didn't think the original one was a great film to begin with.

To kick things off, the story for "Revelation" is completely and utterly confusing. When they adapted the awesome video game, they must have known that trying to portray the 'alternate existence' of Silent Hill was going to be tough. Gans did a decent job at getting the jist out, but "Revelation" can't even pull off anything cohesive. The characters are ignored for the sake of plot, including our lead who at least has some sort of arc instead of nothing at all like the rest of them. The film then has to utterly rush through its plot to fit it all in leaving it a jumbled mess of missed "twists" and feeble motivations. Ironically enough, the film only gets worse when Sharon finds her way to the mystical terror of Silent Hill half way through the film.

At this point, it becomes so obvious that writer/director Bassett has no idea how to build tension or atmosphere. The one great thing about the original one, lost in a director who instead opts for a more Americanized monster film approach with fulfilling scares and underutilized set ups. Mannequin spider demon? Great idea! Well, maybe on paper since it shows up for like 2 seconds and sort of just runs into things. Sound triggered knife wielding nurse demons? Even better. Wait, I was too distracted figuring out why the guys even walked into the room knowing they were there to be slaughtered by them to feel the tiniest bit of fear. Even the all mighty and frightening Pyramid Head returns from the first...to ultimately do battle with a Cenobyte reject in a cheap set that fails to keep my attention. Ugh.

It's no shock that the film was a critical flop. When it's not being cliche, it's being terrible. Granted the film ended up making money on the world wide market (it ended up around $50 million world wide for its $20 million budget), so don't be surprised if "Silent Hill" continues on the straight to home video market sometime in the future. As for "Revelation" though, I suggest a healthy skip and just try to remember the first one for what it was able to accomplish.