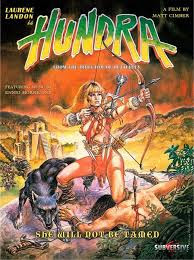 After the success of the testosterone driven “Conan the Barbarian” it was only fitting for the fairer sex to get their due right by having their own barbaric sword and sorcerery epic. The problem is the fairer sex weren’t provided with a fair film as “Hundra”, the first of many female driven “Conan” copies including “Barbarian Queen” and “Red Sonja”, doesn’t come close to the epic greatness of the male driven film they copied. On the plus side it is probably the best of the female driven barbarian films, if that’s any consolation..

Hundra, a heroic female warrior, arrives back to her village to find her matriarchal tribe slaughtered. Having a general hatred for men, the lone surviving elder gives her the distestable order to travel the country side to find a mate in order for her to continue the lineage of her tribe. Her journey leads her to a city ruled by a sadistic king that worships a bull and uses women as toys. Can she destroy the king and his misogynistic ruling while at the same time getting knocked up by a handsome doctor?
Director Matt Cimber is very feminist in his approach as Hundra takes every opportunity to degrade and insult men at every turn in showing how barbaric and sexually devent the male gender is. This is an interesting approach as most barbarian films showcase women as sexual toys (I’m looking at you “Deathstalker”) and it is somewhat hypocritical as the Cimber goes to great lengths to show off his lead actress Laurene Landon, even having her riding her horse naked on a beach!
Filmed in Spain, the film takes advantage of exotic European locations (many of which fans of the Spaghetti Western genre will recognize) and even has Hundra ride to a catchy Ennio Moriconne score (though it pales to other umpteen scores he has provided). The film however lacks any realy drive and excitement. Sure there are action scenes peppered throughout the picture with the lovely Laurene Landon doing most of her own stunts but the film is mostly dull, overlong with only the opening slaughter mimicking the village onslaught from “Conan the Barbarian” being even remotely captivating as the climatic leaves a lot to be desired.
Though not a terrible picture, I was hoping for a little more entertainment value from a female “Conan the Barbarian” clone. The directing and overall film quality is a step above other films in the genre but I’d be lying if didn’t say I enjoyed most of the genre’s bottom feeders even more (give me “Deathstalker” and “The Warrior and the Sorceress” any day over “Hundra”). It just lacks excitement and pacing to make this a truly enjoyable low budget sword and scorcery epic but I do have to admit that Hundra’s dog that leads her horse around by the reigns did bring a smile to my face.