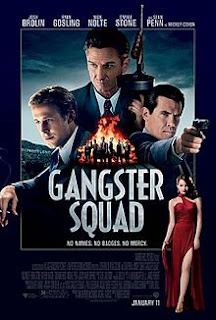 Do you know that moment when you first purchase one of those big ass puzzles, you dump out all the pieces on a table, and its just a massive mess? You look at the beautiful picture on the box and you know all the pieces are there to make that picture, but the massive pile of ink and cardboard overwhelms you as a disaster? That pile is "Gangster Squad." This is a film with all the right components, but they are in all the wrong places. It leaves a film that, like the picture on that puzzle box, should be beautiful, but ends up jumbled, incohesive, and downright confusing like that pile.

Mickey Cohen (Penn) has established himself as both a criminal tyrant and a mob renegade to his ex-bosses in Chicago. His Los Angeles home has become a hive of scum and villainy in the late 40s and the chief of police (Nolte) is fed up with it. He asks a fierce detective (Brolin) to put together a squad of trust worthy police officers to form a 'gangster squad' to bring Cohen to justice. With the help of a reluctant and young up-and-comer (Gosling), the small group have quite a bit on their hands...and it just might kill them in the end.

I want you to briefly look back at the top of this review. I want you to read through that cast listing. Brolin and Gosling as our leads duking it out with Sean Penn as our crime lord in 40s Los Angeles? Tell me that this idea, on paper, shouldn't be Oscar worthy. This is the kind of film that should define an actor/director/writer's career has a highlight. It should any way. So what do we get with "Gangster Squad?" A half assed, style-over-substance film that fails to even find it's footing with a poor script before caking on some haphazard humor and some of the worst dialogue that I've seen from a film of this caliber. It's definitely one of the biggest disappointments of the year.

To be honest, the idea isn't half bad either. Rogue cops gunning down booze smuggling gangsters with Tommy guns. The classic noir elements with dames in poor situations, thugs in suits, and a leader cop who's ex-military and not afraid the throw down. Dammit! This film SHOULD BE SO FUCKING AWESOME. So where is the blame to fall? Well, in a lot of places overall, but definitely in the writing. "Gangster Squad", instead of embracing its darkness script wise, instead opts for an almost 'wink-wink' nod towards the audience. The dialogue is meant to be fun and witty, but comes off as forced and silly including a point where I couldn't stop laughing from Sean Penn declaring 'here comes Santa Claus' before unleashing machine gun fire through a Christmas tree. The characters, besides an intriguing lead in Brolin, are all underdeveloped too leaving a terrible romantic subplot for Gosling and Stone and a team of throwaway cops and villains whose live or die situations fail to feel as such.

One element that the film did get right was the extreme violence. Many critics panned the film for such, but when I go into a film about gangster wars these moments are the ones that actually seemed to feel like they understood the dark places that this film should go. Unfortunately, these moments are undermined by the film's odd play of humor (particularly from Gosling and his arrogant 'don't give a shit attitude' which completely leads a shoe shining boy's serious death sequence as out of place) and the director's penchant for "Sin City" style slick visual schemes. I'm all for tone and style, but in the case of this film it never felt right for what they were aiming for.

Well, I'm glad that I didn't cough up my hard earned cash for a theatrical viewing like I planned to. I probably would have stormed out of the theater raging from all of the missed opportunities that "Gangster Squad" pandered away. Had I known going into it that it was meant to be more of a fun and silly film, I might have been a bit more lenient. As is though, "Gangster Squad" is one of the biggest disappointments I've see. A film that had so much potential and never lived up to any of it.