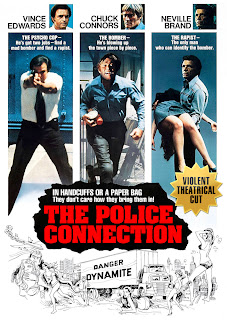 Aka "The Mad Bomber"

With a title like “The Police Connection” one would think this is a low grade clone of William Friedkin’s 1971 crime thriller “The French Connection”. This however was a lame cash-in retitling by distributors and for me the film will always be known by its original title “The Mad Bomber”, a fitting description of what the film is actually about – which is a fucking insane bomber going around and blowing shit up! Sounds far more interesting than the passable “Police Connection” and trust me it is as “The Mad Bomber” is an explosive good time.
Chuck Conners plays an insane man distraught with grief by the death of his daughter so he desides to go around the city blowing shit up. While blowing up a mental health clinic a rapist witnesses his face so a psychotic cop is hell-bent to catch the rapist in order to identify the bomber. Can he do it in time before the city is nothing but ash?
What I love about the film is the triumvirate storylines and how three insane individuals’ lives intertwine in order to stop death and destruction. Bert I. Gordon’s nifty script (taking a break from all his giant monster flicks) is full of surprises and sleaze as the audience cringes as our cop has the trust the word of a seedy rapist in order to catch the bomber.
The casting is impeccable with Chuck Conners shining being cast against type of his usually tough hero role. Who knew he could play an insane nut-job so well and it just brings a smile to my face as he goes around town going all Michael “Falling Down” Douglas on peoples asses, including chewing out a cop for staring at him! Neville Brand, best known for playing the Leatherface stand-in in Tobe Hooper’s “Eaten Alive”, is sublime as the slimy rapist, easily solidifying is face in film history as one of the creepiest actors that ever lived. Vince Edwards also gives a strong performance as the cop on the brink of being as insane as the culprits he is trying to track down.
“The Mad Bomber”, whoops I mean “The Police Connection”, was way more enjoyable than I thought it would be especially coming from B-movie legend Bert I. Gordon. His script was delightfully intertwined and full of sleaze and the cast is pitch perfect raising the film above it’s B-movie limitations. The explosive ending just tops off the film perfectly making “The Police Connection one of the most under-appreciated action/thriller films of the 1970s. Given a rather shoddy DVD release under the better title “The Mad Bomber”, Code Red gave the film much needed respect and unleashed this classic completely uncut with all the violence intact in beautiful widescreen version under the title “The Police Connection”. Make sure to get the Code Red release.

Written By Eric Reifschneider
Posted by Cronosmantas at 11:31 AM