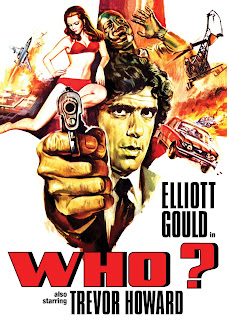 As a youth there was a period of time where I was a science fiction fiend and read all I could by classic sci fi authors Robert Heinlein, Arthur C. Clarke and Isaac Asimov. During this period in my life I read a book simply called “Who?” by Algis Budrys, a philosophical science fiction novel about political espionage. Over the years the story faded from memory and I only recently discovered they made a 1973 film based on the classic story. Knowing the origins I knew the story would be difficult to pull off in film form and my instincts were correct as the film version is a real mixed bag.
The title refers to a brilliant American scientist that’s in charge of a top secret research project getting into a deadly car wreck over the border into Russian territory. In order to save his life the Russian government replaces most of his body with cybernetic components, including completely replacing his face. Soon after the Russian government gives him back to American authorities but FBI agent Elliot Gould doesn’t believe the metal man is who he says he is. Is the metal man really the brilliant scientist or an imposter secret agent?
The cast, acting and directing of the film are all solid. Heavy hitters Elliot Gould (recently divorced from Barbara Streisand at the time) and Trevor Howard light up the cast (while at the same time eating up the budget) and so does Joseph Bova as our ‘cyborg’. The problem the filmmakers faced though was the appearance of our brilliant scientist Lucas. In the novel he was explained to be recognizably human yet at the same time unrecognizable as Lucas. How does one exactly go about this? Well the result of our metal man on camera is rather laughable by today’s standards but it’s not for a lack of trying. The low budget and lack of prep time no doubt aided in the robo man’s humorous look but I’m not sure it would have been any better with more time and money as it is such a difficult concept to visualize onto film.
The final result of the film is for most ‘a good try’ and it’s not for a lack of hard work. Director Jack Gold keeps this cold war science fiction drama moving at a solid pace and keeps the audience guessing until the very end if Lucas is who he says he is but the philosophical subject matter on what makes a human truly human and the look of Lucas is difficult to convey on camera. The result had the film quietly disappear from theaters only to reappear on VHS re-titled “Robo Man” to cash-in on the “RoboCop” craze occurring in the late 80s. As is “Who?” is a compelling oddity from the 70s worth a look for science fiction fans that like depth to their stories, even if it’s a hard literary subject to transfer to film.