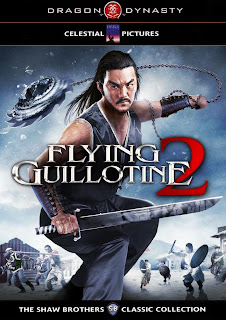 After the success of "The Flying Guillotine" that spawned its own 'spin off' (pun intended) with "Master Of The Flying Guillotine," which is not a Shaw Bros. production, the Shaw studio went ahead with a sequel originally called "Palace Carnage," but will be called "Flying Guillotine 2" for this review. While I enjoyed the shit out of the original film with its strong plot, identifiable characters, and potent action, this sequel tends to lack a bit of the focus and drive that made the first one succeed. Despite its fun and pretty awesome premise, the execution seems to be lacking at times and it just leaves a film that doesn't quite live up to its predecessor.

Only a few years after Ma Teng (Ti Lung) effectively escaped the clutches of the Flying Guillotines, the rule of Emperor Yung Cheng (Feng Ku) has gotten worse. He uses the elusive assassins to reign tyrannically over the Han people. A group of heroes are hell bent to assassinate the power hungry Emperor and with the daughter of one of his close advisers (Szy Shih) they may have the opportunity. Unfortunately, the Emperor has developed a new 'double flying guillotine' to counter Ma Teng's iron umbrella and the heroes are left defenseless...will they be able to team up and defeat the tyrant once and for all?

The idea behind "Flying Guillotine 2" is very sound and incredibly awesome. It continues on with many of the themes and story aspects of the original, but twists them to be a solid ending to the tale. Even though they replaced the actor for our 'lead' Ma Teng, they replaced him with the ever awesome Ti Lung and that's okay with me. I was willing to go with it and with the strong ideas in the film, including having a group of heroes partnering with Ma Teng to bring it back to those bastard Guillotines, this sequel should have been an automatic win.

There are two main issues that arise to hinder this film from reaching it's full potential. Firstly, the story telling tends to be a bit muddled. They add in a second protagonist, Szu Shih who leads an undercover assassination plan, and her addition does add a lot of new layers to the story. Unfortunately, the film then tries to juggle having her and Ma Teng trade off with two different stories and it gets confusing. When Ma Teng loses his family we don't quite feel as devastated as we should because we have been spending more time focusing on her character. The trade off between the two (and various other heroes who don't get the time of day despite having some unique characteristics - including an ill used 'thief' who has one fun moment and is left to die as a character) just tends to derail some of the more potent moments the film could have had.

Secondly, I think the direction of the film tends to fail to support the stronger elements of its story. While the two directors do add some snazzy moments, including lots of dynamic shots and great cinematography, they add in some odd elements that didn't necessarily fit. They tend to play it too safe for the fight sequences, of which there is far more traditional choreography here instead of the cat and mouse fighting that occurred in the first film, and by the time we get to the big finale - they play the final moments in complete slow motion. Epic? Sure, but it's also very distracting and poorly shot making it lose a lot of momentum that could have made it even stronger.

"Flying Guillotine 2" is quite a bit of fun in the end though. The concept and acting is impressive and I loved many sequences, including a failed assassination with poisoned daggers that had me on the edge of my seat. The overall flow of the film sputters as it trades off between our two leads and the direction leaves a lot to be desired even if the film follows the Shaw Brothers formula more with its fight sequences and how the story plays out. I hold the first film in very high regard, so it's hard not to be a bit disappointed in this sequel, but I'm sure many kung fu fanatics will love it for its strengths.