Masters Of Horror: H.P. Lovecraft's Dreams In The Witch House - 4/5 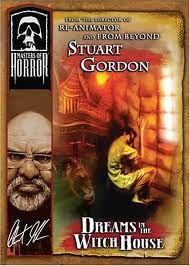 Directed By Stuart Gordon (famous for other H.P. Lovecraft film adaptions "Re-Animator" and "From Beyond".)

When Walter decides to live cheap whilst he goes to grad school, he had no idea that he would be facing much more horrid things than papers. The old house where he lives in the attic is where an ancient witch and her human faced rat have been slaughtering children for centuries. Now Walter has been chosen by the witch to carry on the sacrifices through his dreams. Now is the time for Walter to test his faith and will power against an ancient evil that wants the small child living down the hall.

It's not surprising that Stuart Gordon's episode from the first season of "Masters Of Horror" happens to be based on an H.P. Lovecraft tale. The man has become an expert at updating and making the poetic Horror writer fit the screen. He does him well once again. "Dreams In The Witch House" remains strikingly candid towards the original story that it was based on while updating it wonderfully to match the modern tone. Gordon's odd dark humor does have a hit or miss status to it (seeing the human faced rat does bring some giggles at times especially at first) but the film has some damn solid pacing and some pretty slick special effects. The series is on a role with its first two episodes being so damn solid as little short films and "Dreams In The Witch House" does add onto that with pure Gordon love.

Written By Matt Reifschneider
Posted by DarkReif at 4:22 PM