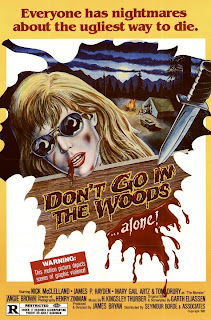 "The most feared animal in the woods is man" claims our closet homosexual hiking guide and the most feared movie in the horror section at your local video store is "Don't Go in the Woods", a wilderness slasher that rivals it's partner in crime "The Forest" for worst slasher ever made.

A psychotic mountain man complete with rosary beads covering his face is roaming the mountains brutally killing all sorts of people making life for a fatass local cop a living hell.

"Don't Go in the Woods" is an obvious quick cash-in in the slasher cycle from the early 80's and producer director James Bryan is an obvious amateur as the directing and camera work makes this an early contender for "The Blair Witch Project." The whole film is shot with a really shitty hand held camera so in actuality it would fit right in with today's shitty hand held shaky cam horror films if it weren't for its 70's looking style despite being made in the 80's (proving how the low the budget is!).

The film's narrative is as erratic and annoying as it's awful score as it jumps around haphazardly from one person getting brutally killed to another. Unlike that monstrosity known as "The Forest", at least "Don't Go in the Woods" has blood and unique killings to keep slasher fans watching and suffering through the awful dialogue sequences (my personal favorite being an attack on a hippie Volkswagen van in which our killer roles down a hill with his bare hands no less resulting in the van spontaneously bursting into flames).

Unlike that "other wilderness horror film" that I've mentioned numerous times, "Don't Go in the Woods" does poke it's head into the "so bad, it's good" category and I can see why this film has a cult following but thanks to its shitty directing and score it still comes nowhere near the likability of other "so bad, it's good" slashers like "Sleepaway Camp" and "The Slumber Party Massacre."

At least "Don't Go in the Woods" has blood and gore so in that aspect alone it is better than "The Forest" but it is still an awful film that makes the likes of the "Friday the 13th" films look like "The Exorcist" in comparison. Speaking of "The Forest", "Don't Go in the Woods" was released in Australia as "The Forest II" despite being made a full year prior to it. How shitty does a film have to be for it to be advertised as a sequel to another uber shitty horror film? Just a word of warning...

Written By Eric Reifschneider
Posted by Cronosmantas at 10:40 AM