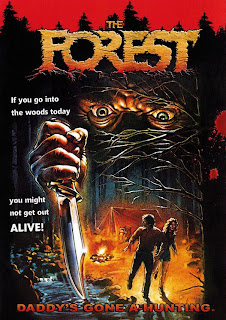 You know a slasher isn't going to bode well when your killer looks like a hobo version of George Lucas. On that note I have to say The Forest, out of the gazillion slashers that I've have seen is one of the worst, if not the worst I have had the displeasure of sitting through. Don't let the good poster artwork fool you.... it begs you to come in, to let your guard down and sit back and enjoy what seems to be a "Friday the 13th" knock-off. Enjoyment will be the furthest thing from any slasher fanatic's mind while sitting though this mind numbingly bad stalk 'n slash.

The Forest begins in typical slasher style with a poorly shot stalk and kill sequence of two back packers being sliced by a unseen madman with a hunting knife. Cut to the city and we are introduced to two dimwitted men who are challenged by their wives to go up into the mountains to camp out. The wives travel up first only to run into George Lucas, who now seems to be a wife killer turned cannibal. Their husbands show up later and it becomes a race of survival with our couples getting aid, get this fellas, from the ghosts of the killer's two children! Wha...wha...WHAT?!?!

Director Donald M. Jones, obviously a novice at the job, knows that slashers are run-of-the-mill so he injects this supernatural slant of adding the ghosts to set it apart from other films that flooded the subgenre in the early 80's. I will commend him on trying but it's so haphazardly done that it comes off more laugh inducing.

For a slasher, The Forest also surprisingly lacks blood... like almost none! No creative gore and no unique killing sequences and films of this nature depend on schlock like that to get tickets sold. Like I hinted at before our killer is also nothing that will haunt your dreams at night (though the image of George Lucas does make me shutter!). Most slashers try to make something memorable or unique to their killers, by giving him a trademark weapon (machete, butcher knife) or mask (hockey, William Shatner). Not here! All he is a gray bearded, middle aged man that sits in a rocking chair in his cave (complete with candlelight!) while roasting various hunks of human meat over an open flame. Hell a visit to your local Wal-Mart at 1 am would give rise to creepier hoodlums!

So it has a boring killer and no blood.... it must have great acting, stylistic directing and a rockin' score to make up for those losses... right? OH FUCK NO! The acting is high school level, the directing is amateurish at best and the score sounds like a chimpanzee was let loose on a cheap, early 80's synthesizer. We are even "graced" with two god awful 80's pop tunes!

I kept praying to the god of slashers to please, please allow Jason Voorhees pop up from behind a tree to kill this cracker jack hobo cannibal. Hell I would have even settled for the Paramedic posing as Jason from Friday the 13th Part V! There is nothing, absolutely nothing to recommend about this slasher! It's got shit acting, shit directing, a shit killer, a shit score, no blood, no gore, no nudity, no suspense and a silly ghost subplot! The only thing I can praise the film for is that it actually had adult characters as opposed to cliché teenagers. Oh and the poster artwork was also good. Damn you poster artwork... how dare you trick me into sitting through yet another garbage bin slasher!

Written By Eric Reifschneider
Posted by Cronosmantas at 1:50 PM