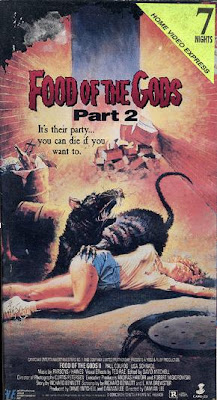 Thirteen years after the craptacular 1976 film adaption of H.G. Wells' famous story "The Food of the Gods", filmmakers finally "bless" us with the long awaited follow-up that 1, maybe 2 people clamored for. 13 years? They might as well have remade the damn thing as opposed to making a sequel. Well come to find out "Gnaw: Food of the Gods II" basically remakes the film and has no story or plot carryover despite the original having an opened ended ending. As you can tell from my rating the filmmakers made this sequel/pseudo-remake no better but actually a little worse proving 13 to be an unlucky number of years to wait.

The basic plot is the same as the original about a serum that as the ability to grow plants, and rodents to enormous size. "Gnaw" begins with a professor called by an old colleague to come see a boy that she grew to an enormous size (this sequence is quite laugh educing as the gigantic boy starts spouting fowl language). Apparently she tested an experimental growth hormone on the boy and now it's up to our professor to find an antidote. At first he tests it on tomato plants and his test specimen rats just happen to get a bite and grow to enormous size. Thanks to a dumbass group of animal rights activists they accidentally release, in the words Westley from "The Princess Bride", the ROUSs (Rodents of Unusual Size) and killer rodents decide to masticate, or "gnaw" all the students on campus.

Unlike the original film which took itself stupidly serious, the filmmakers here go more for a slight tongue-in-cheek approach. They took the concept of giant rats that eat people and ran with it. Sadly director Damian Lee doesn't push the tongue-in-cheekiness far enough and it just comes out bad.

This cheap Canadian quickie bares its budget constraints when it comes to the quality of film-making. Director Damien Lee gives the film no style, rendering it look like late 80's direct-to-video fare. The boom mike even pokes it's head into the frame in a few sequences....and that's just plain laziness! The special effects are also not that great, utilizing the same special effects techniques with miniatures, giant rat heads and forced perspective that the original film did 13 years before. One would think effects would have made a bigger jump in 13 years. I can't bitch too much about the effects as I will take these effects any day over the lame shitty CGI that infects most nature-run-amok films now-a-days. Speaking of shitty CGI flicks, the Artisan Region 1 DVD cover to this rat turd is awful! It makes it look like a made for Sci Fi (excuses me... SyFy) Channel original.

The only thing I can really praise this film for is it does pile on the blood. The original had some blood but director Damien Lee decides to load this sequel up with violent rat attacks and and gore to more appease the 80's horror crowd. A shocking sequence comes towards the end when the rats attack a synchronized swimming team (yes, you did read that right) and there is a shot underwater showing an arm and head sinking. Holy hell!

This awful film is only for fans of lame monster and nature-run-amok films. It does hold a special place in these fans' hearts as it really is one of the last films of its kind before the shitty CGI craze took over. You get all your blood and gore, CGI free!

Written By Eric Reifschneider
Posted by Cronosmantas at 7:35 PM