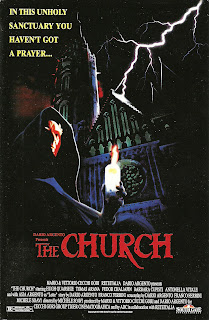 Another film also known as "Demons 3"? How many more can there be? Well "The Church" began as "Demons 3" early in its development stage but when Lamberto Bava lost interest in doing the film, the script was retooled to be a stand alone movie for Dario Argento protégé Michele Soavi. Despite being a stand alone film, it did get released in some areas under its working title "Demons 3" and out of all three films to be known under that moniker, "The Church" is the best.

The film opens with an amazing sequence of religious knights riding into a small village of Satan worshipers. They slaughter the village, bury the dead in a huge pit and resurrect a huge gothic church on top of the site. Flash forward to the 1980's and we are introduced to an librarian hired to work in the church's archives. He and the restoration painter have a quick fling then he becomes interested in a dark room hidden in the back of the church where he unwittingly opens a gate to hell, triggering a defense mechanism sealing off the church to stop the spread of demonic possessions. In the middle of this we have a black priest and a the sacrison's daughter (played by Dario's daughter Asia Argento) trying to escape the hordes of possessed people trapped within.

Italian horror films tend to be "style over substance" and none fits this description more than The Church. Michele Soavi's style is mesmerizing proving Dario molded a great director. From a stylistic standpoint, "The Church" very well might be Soavi's most beautiful looking film. The film is thick with style and full of amazing camera work. His style is brought even more to life with another fantastic score by members of the cult Italian group Goblin.

What hurts the film is the convoluted plot flow. It took eight writers to tool the script and it shows as it is a mish-mash of ideas that borderlines on incoherency in some portions. An example is Asia Argento's character. In the beginning of the film we are shown her character back in medieval times. What's the connection to her in the present? It's never explained. The demonic possessions are also inconsistent. Sometimes the possessions seems to be spread through scratching people (like in Lamberto Bava's films) and other time people are just possessed randomly. The part that irks me the most is that the film consistently introduces characters that conveniently disappear. When the church's defense mechanism is triggered, it traps a group of young students within the church. Soon after they are never shown again. Where did they go? These are just a few examples of the hodge podge story.

Even with its plot inconsistencies, it still is a fun Italian horror film full of memorable images, amazing camerawork, and plenty of gore to appease fans. It's a little more sophisticated than Lamertos Bava's "Demons" films but it is still plenty of fun and is a definite must own for fans of Italian horror.