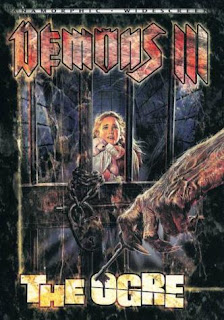 Demons III? I'm calling bullshit. Low and behold I'm right and despite being directed by Lamberto Bava, director of Demons 1 & 2, this has nothing to do with his first two gruesome twosome and seems to be another shady attempt by Shriek Show Entertainment to falsely put a title on the box art in order to sell more copies much like "Zombie 4": After Death and "Zombie 5": Killing Birds. I cannot put the blame completely on Shriek Show though as "The Ogre" (that is what the title card reads) was also released as "Demons 3: The Ogre" in the UK and Australia. To make matters even more confusing, "The Ogre" is one of three films also known as the non-existing "Demons 3" (the other two are Michele Soavi's "The Church" and Umberto Lenzi's "Black Demons")

In reality "The Ogre" is one of four full length TV made films that Lamberto Bava made for the cable series "Brivido Giallo." Right away people going into this film with expectations from the false "Demons III" title are going to be sorely disappointed by its TV movie limitations. The film is actually a rather atmospheric tale that opens with a young girl roaming a dark castle during a stormy night, clutching her teddy bear as she wonders into the basement where a hideous ogre emerges, or grows, from the ceiling. It ends up being a nightmare and the girl grows to become a successful horror novelist. Needing inspiration she drags her husband and son to spend the summer in a remote Italian castle only to find out her nightmare has become reality as an Ogre soon emerges to terrorize her family and the country side.

Lamberto Bava's sure handed direction gives the film a thick gothic atmosphere that is surprisingly strong despite its TV movie limitations. The underwater corpse sequence was tops and brought to mind the memorable sequence in Dario Argento's Inferno. Gotta love underwater horror! Bava's atmospheric setting and direction is aided by a terrific score by Simon Boswell, who also provided a kick ass synth / keyboard score to Bava's Demons 2. This very well might be his best score ever!

The plot fits its TV limitations well (it's not really strong enough to warrant a theatrical release) but the TV budget does rear its ugly head now and again. First of all the special effects are not that great but if one goes into this expecting a TV movie then they are easily forgivable. The plot also takes it's sweet time to introduce the ogre and by the time it does, it seems almost too late. I also was a little upset on how everything is hastily tied up at the end and people that were clearly killed by the beast are miraculously alive. I'm used to Italian horror films lacking logic but some of the lapses in logic here did perturb me a tad.

Overall I found The Ogre to be a satisfying made-for-TV Italian horror film directed by the stylistic and quirky Lamberto Bava. It's got an interesting enough plot and a great atmosphere despite it's lapses in logic. A lot a people tend to be hasty on the film judging it by its box title making such remarks as "it has nothing to do with Demons!" One must go into this film ignoring its box title and I believe Euro horror fanatics will find an interesting film hidden behind it's "Demons III" title.

Bonus Rant: Typical with Shriek Show DVD releases, "The Ogre" has a defect on ALL pressings of the disc. A sequence goes black with green blocks for a few seconds during the film. Since this is probably the only DVD release "The Ogre" will ever recieve, people are just going to have to suck it up and live with the small defect.

Written By Eric Reifschneider
Posted by Cronosmantas at 1:55 PM