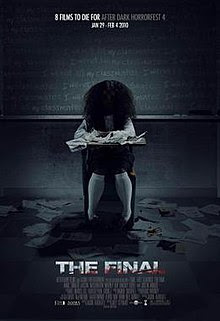 Moving forward with the fourth After Dark Horrorfest, "The Final" finally hit my viewing pile. Despite some pretty atrocious films littering this year of the releases (see "The Graves"), there has been more than enough to make up with surprisingly solid indie Horror films. "The Final" sits in this latter section. Although the concept of the film seems a bit daft initially, the dedication towards the film and its eventual ending that plays out in solid execution. This saves "The Final" from drifting down the path that too many independent Horror films tend to anymore.

A group of outcasts, lead by the seemingly weak Dane, have devised a plan to get back at the group of bullies and snobby high school students that have made their lives a living hell for far too long. This group of off kilter teens are planning to throw a costume party in an abandoned barn for their enemies. When they all get there, they are planning to torture them and teach them a few life lessons about treating people with decency. With nothing left to lose, its now time for revenge, but who will be able to get out before things go too far?

What makes "The Final" such a surprisingly well devised revenge/torture flick is the heart at which these kids are giving their characters. Normally, these cliche tortured student teens run the same thing over and over again coming off as 2D characters, but this film does a nice job really building them up. Granted, it still could have gone farther with their character arcs in the latter part of the film when the tension between them should be riveting and only comes off as intriguing. Yet there are plenty of cool builds that make it work (like the tall lanky kid's talk with his father for example). This makes the rather cliche concept work best.

At times the film does tend to want to build a larger story then it should have. With a focus on the tension between characters and building the suspense on what is coming up next to whom, this film may have not had to divert attention to other aspects like the subplot with the war veteran that feels like padding. When the film does this, it works. When it tries to get moving in other directions (with its somewhat preachy monologues too) that's when it weakens and falls apart.

"The Final" did come off as a surprising win as a little Horror film. Not the greatest, it still needed a bit more tweaking of its pacing and story focus, but its dedicated actors and heart rise it above the rut it could have been stuck in. Definitely one of the better films out in this series for this year.

Email ThisBlogThis!Share to TwitterShare to FacebookShare to Pinterest
Labels: After Dark Horrorfest, Horror